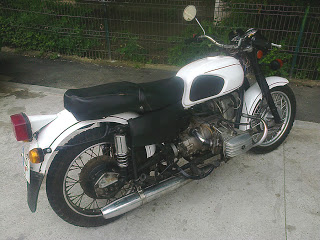 In the latter part of the Cold War, the Eastern Block fleet of motorcycles primarily featured small capacity, mixed fuel machines whose road performance was generally considered merely “OK” in the early 60’s; since the more powerful Izh Planeta “Sport” was limited to motocross clubs, the fastest 2 wheels an ordinary Soviet citizen could purchase were still 2 stroke twins. The Izh Jupiter and especially the Czechoslovakian Jawa 350 were every motorcyclist’s dream, but even they were plagued by ignition points de-synchronizing, and by the end of the 80’s they were decades behind what the free world was riding.

There were only 2 brands that didn’t spit blue smoke with a nasty irregular pace, or at least they spit significantly less: the 4 stroke IMZ Ural and the KMZ Dnepr. Dubbed “heavy motorcycles with cross-country capability” these utilitarian sidecar machines possessed the charm of their Bavarian ancestor- with the smell of a fair skinned, blue eyed “devushka” that also knew how to make borscht. An enclosed drive train, good ground clearance, low gears and oversize clutch all combined in a machine equally suitable for fishing on the frozen Lake Baikal, carrying your family and the yurt in Mongolia or accessing remote high altitude villages of the Caucasus. 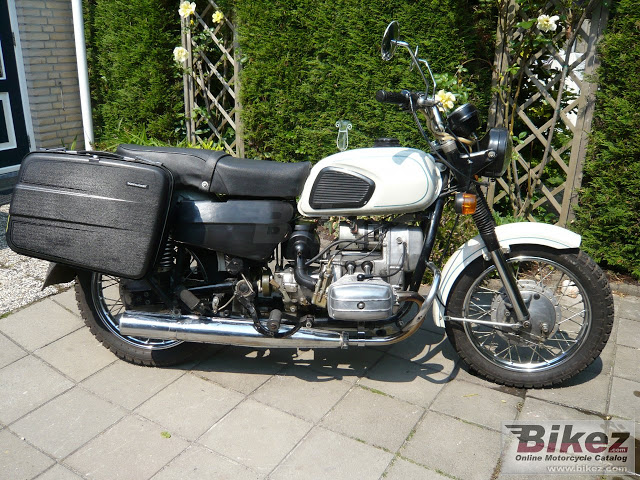 Alas for Soviet motorcyclists, running this big class of bike with the sidecar detached was illegal. That might have been for 2 reasons; to prevent civilians from outrunning the police Urals, and to keep them useful for the military as they were all to be requisitioned in the event of war.

But in 1991, 6 years long years since MOTO CCCP magazine started advertising European and Japanese machines to the Soviet public, the gigantic Ukrainian KMZ Dnepr plant came up with the bright idea to provide the working class with a dedicated solo machine. By that time the laws had changed: rockers / bikers had put the sidecars in storage and were improvising mods on Dneprs and Urals with an eager eye to the West. 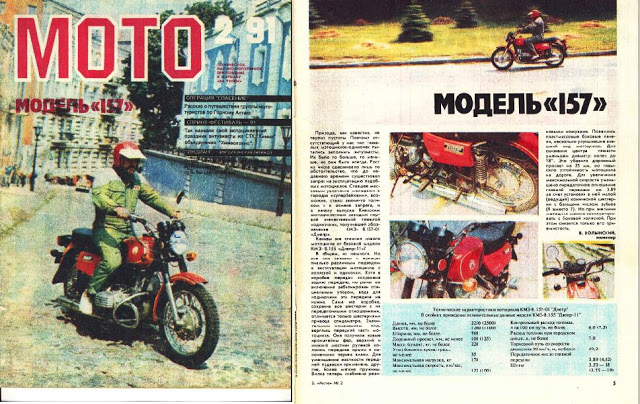 Derived from the Dnepr MT 11, the modifications were mainly designed to improve solo handling and included 18″ rims instead of the traditional 19″, a 9/35 cog ratio in the final drive, appropriate tachometer gearing, tapered steering bearings instead of rubber bushings, and softer springs for both the rear shocks and front fork. In addition the upper yoke was made from aluminum and the handlebar camber was adjusted for a more prone riding position. 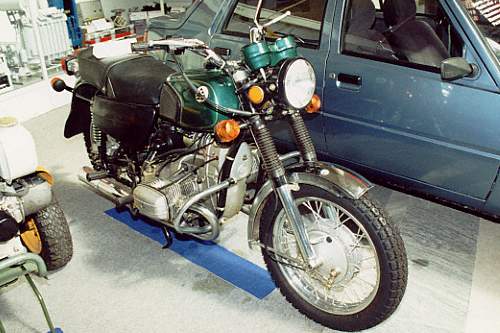 Aesthetic changes were also made, probably inspired by BMW /7: the front suspension featured rubber boots and shorter headlight mounts, the front fender was slimmer and closer to the wheel, and either painted and striped or chromed. Plastic covers were mounted on the sides, painted or not, with or without stickers. The exhaust system was never actually 2 into 1 but a balance pipe was fitted. The early models featured the familiar cigar shaped exhaust, but subsequent versions were straight cut.
Functional items were front crash bars bolted on bushings welded to the frame, a plastic box for storing stuff under the bench seat, a tire pump and of course right hand turn lights. Last but not least, a side stand. 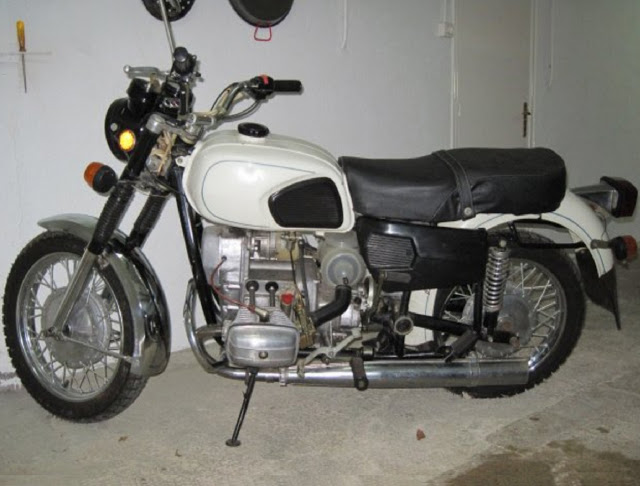 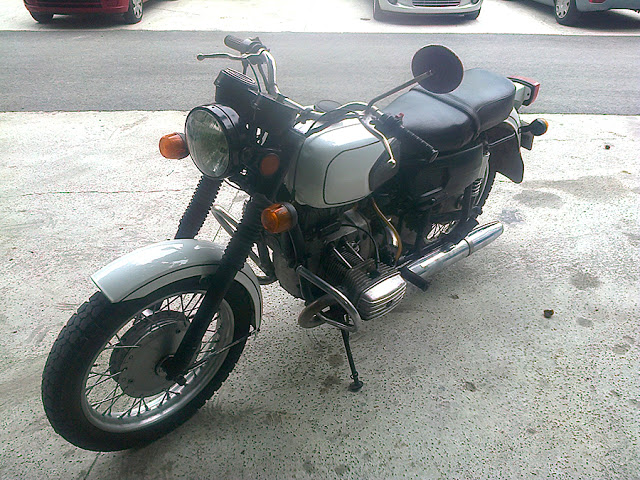 My bike belongs to batches of Dneprs brought in trainloads direct from the factory to Romania in the early 90‘s, the last big production runs. Among the many sidecars there were some solos. The Dnepr 8.157 is a rare bird in the East, rarer still in the West. The performance sheet is discouraging due to the stock 32hp output, 4 gears (+reverse) with the same transmission ratios. This bike didn’t benefit from either Dnepr Escort experience or the research done on the 1000ccm Dnepr 8.158, the “Dynamite“. Not much of a breakthrough for 1991. 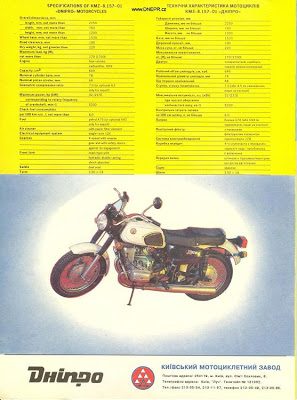 So how does it ride? Dnepr owners are biased, that “borscht” I was talking about.
The engine shudders at idle: it is more noticeable as a solo, which is charming. I have a “higher” rear drive ration 10/35; it doesn’t taket off like an 8/37 Dnepr MT11, (first gear gets a little too high) so at times I may even have to slip the clutch a bit. BUT it is comfortable at 100km/h cruising and it gets adequate cooling. That‘s the equivalent of road performance of a solo 750 Ural, bar the top speed.

The 18″ wheels lower the center of gravity and improve steering, and less rotation mass makes the brakes slightly more efficient. The softer suspension was a must, as the rear shocks from the sidecar machines were too stiff. The front telescopic shocks have the same nice long travel.
Of course the softer suspension combined with the shaft drive characteristics makes the bike rise under acceleration and lower when decelerated, a fact to be aware of on a twisty road.

I should mention the more sporty riding position, but unlike BMW/5 the handlebar is wide enough. The bike corners better than a solo Dnepr MT 11, I think I just might scrape the foot peg on right hand turns, on the left there’s the side stand.
The bench seat is big and comfy though in time it tends to mold to the derriere of the rider. The passenger has loads of space. There’s a YouTube video of 6 teenagers riding that bench.
The foot peg position is a bit uncomfortable, and due to the prone attitude I rest the tip of the boots instead of the sole. Yeah, and the right foot rests on the exterior half of the foot peg because of the rear brake lever – but that is an ubiquitous Dnepr trait.
Since the bike is lower you have to watch out for car mirrors. The crash bars are not that wide, but they protect the cylinders and in case of a hard impact they will break close to the frame bushings.
The plastic box under the saddle is good for carrying a few wrenches and small spares, but no room for the necessary hammer. 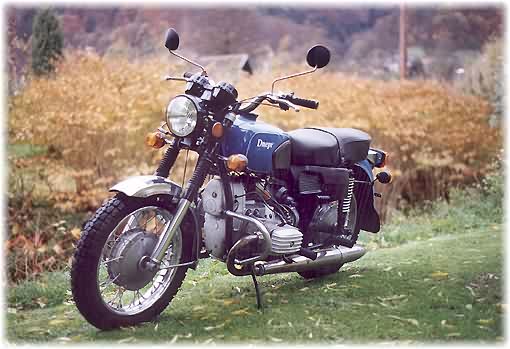 The side stand is easily drawn out, but the spring will retract it as soon as you tilt the bike to center. Be absent minded or let others touch the bike and it will land on it’s side.
The bike is of course easy to service, engine wise: the same central stand and the smaller diameter wheel makes the latter easier to dismount.

Soon after the Dnepr 8.157-01 came into existence the Soviet Union dissolved and Ukraine became independent. Their planned economy died and the borders became flooded with imports. There were few government orders, and there were already enough sidecars for the domestic market. The Dnepr continued to sell abroad, but those sales could only sustain a fraction of the projected factory output of 150 000 units per year. Coupled with over-taxing, no advertising, EU import restrictions due to new pollution regulations, and no factory dealership to distribute parts, it is a wonder the end came so late.

The SOLO 8.157-01 was joined by another model, the 8.157-02 “Chopper” with a different handlebar, rear rack, redesigned bench seat and upward exhausts. Until recently small numbers of Solos were built with front disk brake, electric starters, external oil filter and aesthetic variations: some like the 8.157-022 boasted more compression. Who knows if Dnepr 8.157-023 and 8.157-06 ever came to being, even in the form of mere prototypes? 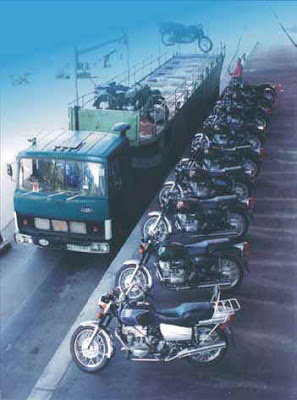 Hand assembled from old stock parts  -or even cannibalized second hand parts as the conveyer belts were last turned on in 1996- anyone lucky enough to procure a “brand new” Dnepr from the factory got a deal. In 2008 a brand new Solo cost $1,682.00!
But in the middle of Kiev one still finds a few ruined 65 year old production facilities. Land investors are kept at bay by the economic depression.

Unlike the Russian IMZ Ural, the state-owned KMZ keeps quiet. Suspect Dnepr parts are still available, could it be that some wise guys make money by an uncontrolled small production line still existing at the plant? Sources said the factory finally closed in the fall of 2011, not to be opened again, and the Dnepr website went down, although recently a renewed site informs us about a new program to modernize production. The Dnepr Solo is no longer featured.
– Pera Baity, June 2012