An often overlooked aspect of motorcycle history -and indeed automotive history in general- is the Trike. It was an integral step in the development of motorcycles as we know them today, making that first move away from a bulky four wheeled wagon to a more lightweight frame and consequently lighter engines that were necessary to power the two wheeled designs. Many, if not most, of the historical motorcycle manufacturers either started with trike designs or at least experimented with them.

Full sized pedal trikes date back to at least the 1600’s, but possibly the earliest trike with an engine was patented by L. Hardaker in 1880 in Britain.
Karl Benz, (who later founded Mercedes-Benz) took out a patent on April 28th, 1886 for The Benz Patent-Motorwagen, a two seat trike with a Benz 954 cc single-cylinder four-stroke engine. In fact, this is widely considered to be the first automobile: i.e., the first vehicle specifically designed to be propelled by an engine.

Plenty of manufacturers soon followed suite; Léon Bollée introduced his 3 wheeled Voiturette to an approving Le Mans audience in 1895, and in 1896 the De Dion Bouton Tricycle hit the European market with a 137 cc single cylinder engine: in trials it hit an unheard of 3500 rpm. In 1898 Louis Renault had a De Dion-Bouton trike modified with fixed drive shaft and ring and pinion gear, creating what was probably the first “hot rod” in history.

But the three wheeled configuration lacked the stability of its four wheeled counterpart, and it couldn’t compete with the sporting configuration of the new “motorized bicycles” that were becoming popular by the early 20th century and could easily be modified with a sidecar. Instead it settled into something of a niche market as a service vehicle, where it still managed to prove useful with an economic advantage over bulkier vehicles and the ability to carry more cargo than a motorcycle.

Harley Davidson can probably be credited with much of the design of today’s trikes.
In 1913 the company introduced The Motorcycle Truck, which was essentially a cart with a wooden box  mounted in front of a Model 9 565cc. motorcycle; originally designed for use by the Postal Service, it could carry up to 550 lbs. of cargo and soon became popular with commercial clients. But sidecar configurations proved more adaptable and the “truck” was short lived.

As the 1930’s dawned in the era of the Great Depression, Harley-Davidson was desperate to increase sales. Their solution was the 1932 introduction of their first “true” trike, the ServiCar.
The Servicar had a 45 cubic inch flathead from their R model and indeed most of the front end and gearbox came straight off that bike. But the frame was an actual tricycle, with a two-wheel rear end and a load-carrying box.
The Servicar was “Intended primarily for use by garages and services stations in the pickup and delivery of customer’s cars.” The trike was fitted with a towbar on the front, so one rider could go out to the customer and then tow the trike back to the shop (or conversely deliver the automobile and ride the trike back).

The Servi-Car soon gained  popularity as a utility vehicle for small businesses and mobile vendors as well as police departments, some of which still used Servi-Cars into the 1990s. Production ran from its introduction in 1932 right up to 1973. 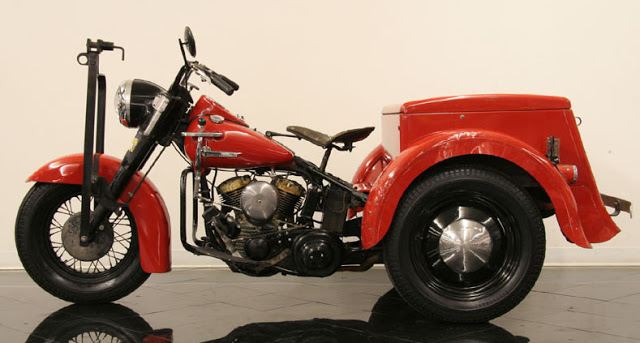 As noted in my previous article on Vintage Choppers , most sources reference the movie Easy Rider as the start of the custom chopper boom and national news stories on the antics of the Hells Angels in Altamont certainly had the image of the biker outlaw already fixed in the public’s eye. Ed “Big Daddy” Roth (An (un)Holy Trinity of Custom Culture- Part 2, Ed Roth) quickly jumped into the fray producing some highly customized chopper themed trikes. Through the ’60s and ’70s the trike exploded back onto the scene in some incredible configurations: a three wheeled frame was perfectly suited to lightweight fiberglass bodies and there was plenty of room to use larger engines. 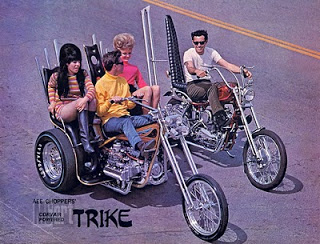 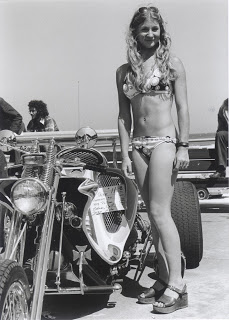 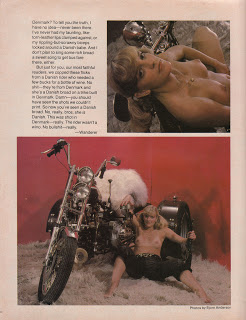 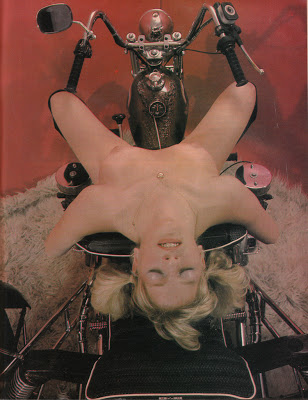 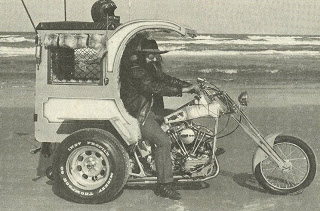 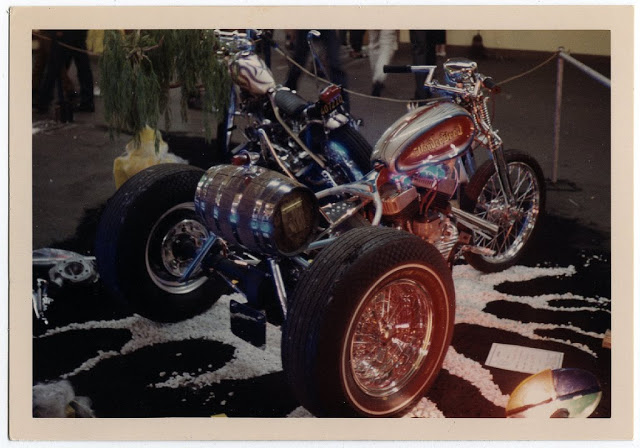 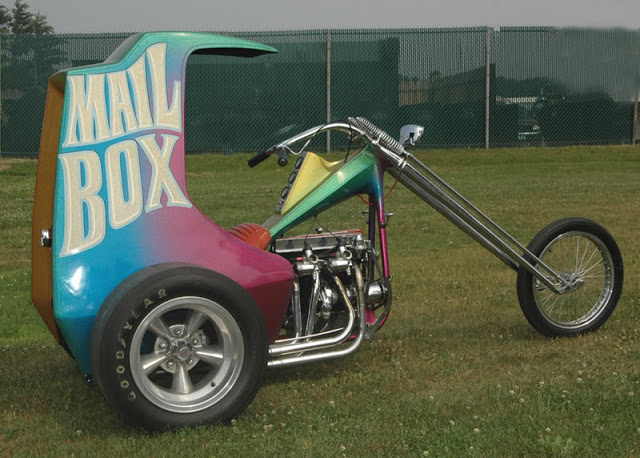 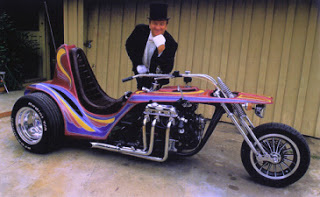 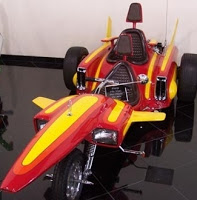 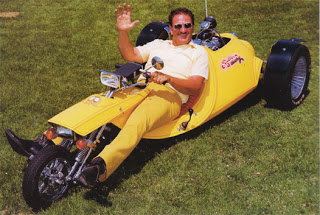 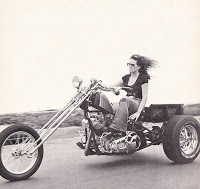 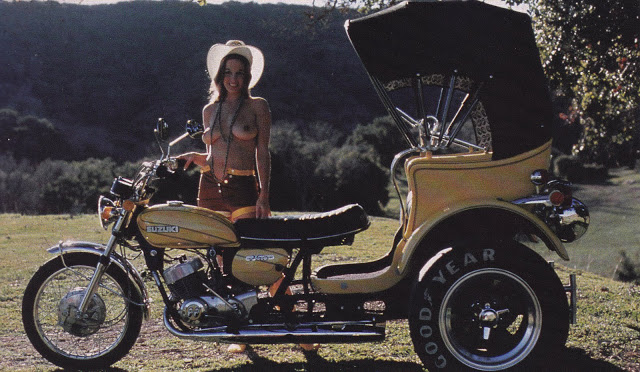 Built in 1969 by the man who pretty much invented Coffin Tanks (look for an article on him here in the near future), this one made the cover of Roth’s Choppers Magazine in July 1969.
The trike features a Corvair engine, J.D. Springers front end and an inverted transaxle.
This machine seems to have dropped out of sight these days, (most likely in a private collection somewhere) but Gary’s daughter has posted on several other blogs trying to locate it if anyone has recent info on its whereabouts: it’s a hard machine to miss in a crowd. 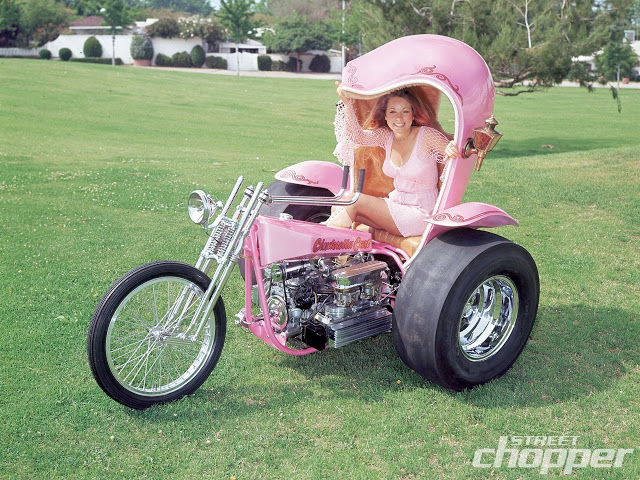 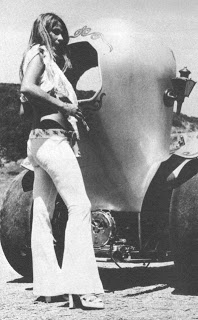 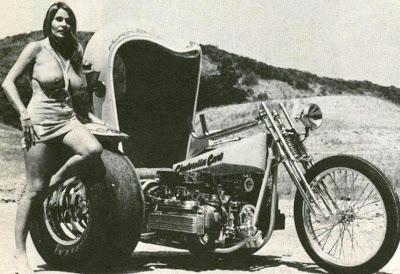 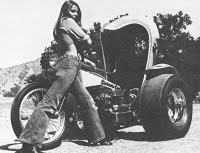 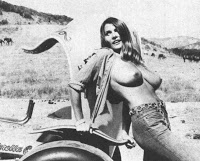 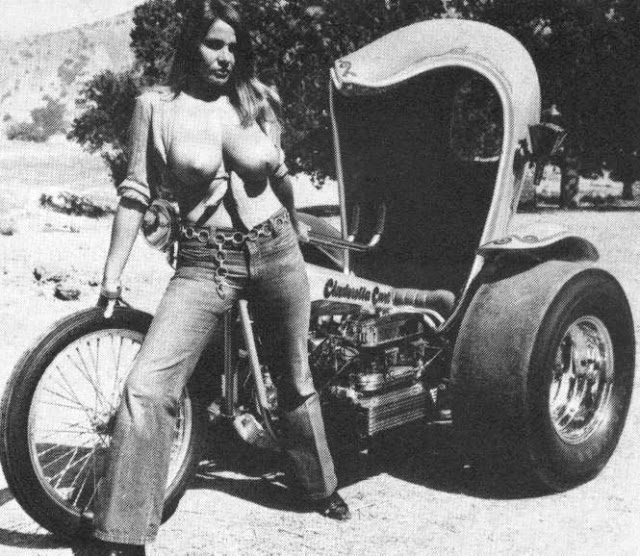 In modern times sidecar usage has declined considerable (in fact they’re almost nonexistent on anything besides Urals/Dneprs/Changs or vintage machines) and trikes have made something of a comeback; they’re especially popular with older or handicapped riders, but many of the current bike builders are also using them to experiment with larger engine capacities.  Harley has introduced a new trike model in 2011 very similar to the old Servicar, and a multitude of specialty conversion companies have sprung up. 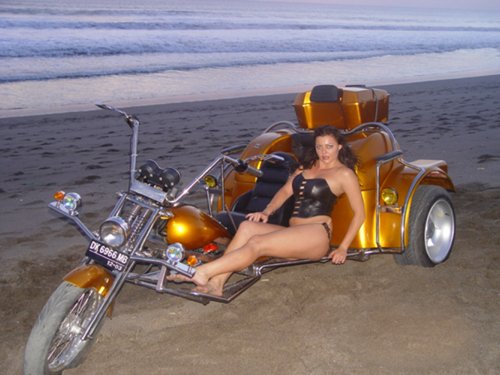 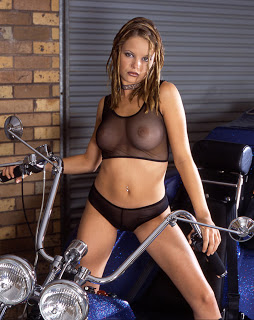 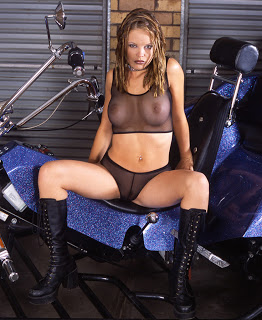 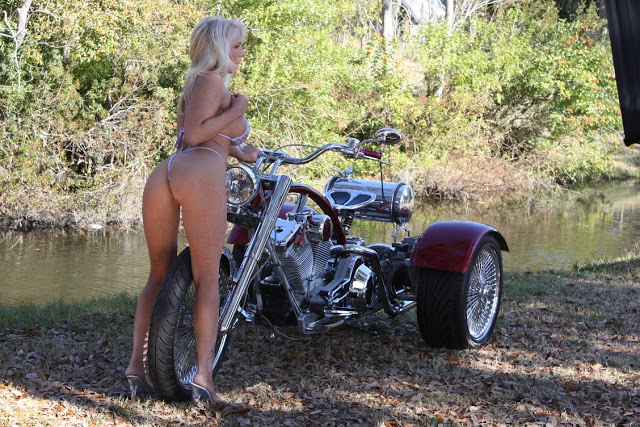