↓
Viewed from the outside, a wall is a defense.
Viewed from the inside, a wall is a trap.
The carnies start even before dawn. Everything is unpacked and each piece is carefully locked together. The grandstands are bolted up.
By noon it starts to fill; civilians munching cotton candy and popcorn, peering down into this strange barrel. A single motorcycle stands ready at the base of a shallow ramp. A rider appears.
The show is about to begin, and for those in the crowd who never quite grasped the laws of physics- farmers, shopkeepers and herders- something incredible will unfold.

The Wall of Death originated from board track racing, which itself originated from the French bicycle velodromes. Originally the velodromes were built around existing athletic tracks and featured two shallow banked 180 degree turns connected by two straights, but during their heyday in the late 19th and early 20th century these tracks moved indoors and the shorter spans necessitated steeper banking. The new indoor tracks were constructed from wooden planks fitted end to end: this type of construction was not only relatively inexpensive but the boards were easy to shape and replace and provided a smooth track surface.
Hemingway wrote:
“I have started many stories about bicycle racing but have never written one that is as good as the races are both on the indoor and outdoor tracks and on the road. But I will get to the Vélodrome d’Hiver with the smoky light of the afternoon and the high-banked wooden track and the whirring sound the tyres made on the wood as the riders passed, the effort and the tactics as the riders climbed and plunged, each one a part of his machine… I must write the strange world of six-day races and the marvels of the road-racing in the mountains. French is the only language it has ever been written in properly and the terms are all French and that is what makes it hard to write.”

In 1910 the first board track designed for motor racing opened as the Los Angeles Coliseum Motordome near Playa del Rey, California. The track was built from 2×4 boards set end to end and was banked at 25°, but by the end of 1911 board track speeds had noticeably spiraled upward due to refinements in engine technology and track design and banking on the motordromes was repeatedly increased until 60 degrees became the norm. Higher banking produced higher speeds, and it wasn’t long before G forces began to take a toll on the drivers.

With spectators looking down onto the track from bleachers at the top of the boards, any loss of control in the turns could quickly turn disastrous: centrifugal force would easily send both the rider and his machine over the top of the track and slamming into the crowd.

On September 8, 1912, Eddie Hasha lost control of his Indian while doing 92 mph. at the New Jersey Motordrome near Atlantic City. The bike rode the rail for some 100 feet, decapitating a young boy who had put his head over the rail to watch the race; it then struck a post, throwing Hasha into the grandstands and killing him instantly along with four other bystanders. The Indian fell back on the track killing another rider, Johnny Albright. Several people had broken bones and flesh wounds as they trampled each other to get out of the carnage. A front page story in the New York Times dubbed the races “murderdromes”.

Nonetheless, around a half dozen tracks up to two miles long had opened by 1915, and by 1931 there were 24 operating board tracks in the USA. Although the tracks were usually used for motorcycle racing, auto racing was quickly added to the venue: by the 1920s most of the American National Championship races were held on board tracks. But by the early 1930s board track racing had fallen out of favor due to both its perceived dangers and the high cost of maintaining the wooden surfaces for machine racing, which created considerably more stress than the French bicycles. Another factor was that as speeds rose due to more powerful engines, overtaking on the steep tracks became increasingly suicidal; as long as it held together, the first machine to take the lead would almost always win the race. Fans soon turned their attention to the less predictable races taking place on dirt and flat tracks. Although board track racing continued into 1940 at the Coney Island Motordrome and a few other places, by the beginning of WW2 it had basically faded into history.

But the motordrome had spawned a bastard offshoot; the silodrome, better known as The Wall of Death. 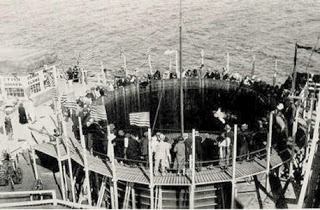 By 1915 traveling carnivals were an annual staple throughout America, and the rising popularity of the motordrome wasn’t lost on the operators of these ventures. History is vague on the originator of the first silodrome but the dimensions are said to be derived from the standard diameter of a grain silo from that time, about 20 – 36 feet. The traditional silodrome was a single track, but later versions known as combination dromes used two tracks on top of each other; a shorter, steeply angled lower wall with a taller vertical top segment. Combination dromes were more portable and better suited for traveling shows.

The Wall of Death completely did away with the straights and was simply a vertical sided wooden drum or barrel shaped track with an initial ramped section at the bottom to give the rider enough velocity to drive horizontally to the floor: rather than racing the riders performed stunts and often incorporated other acts into the show. Women riders were highly popular, as were lions.
Yes, lions.
As in “Liondrome”. 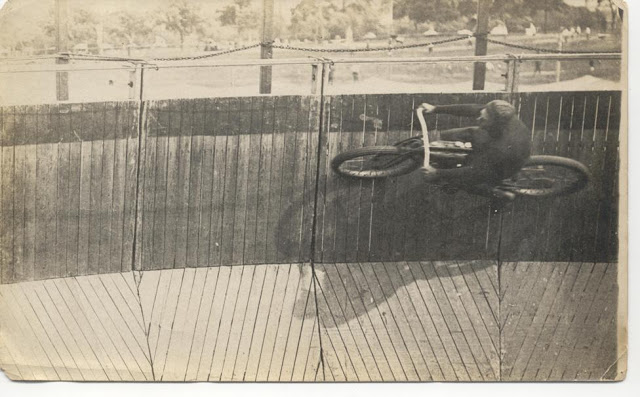 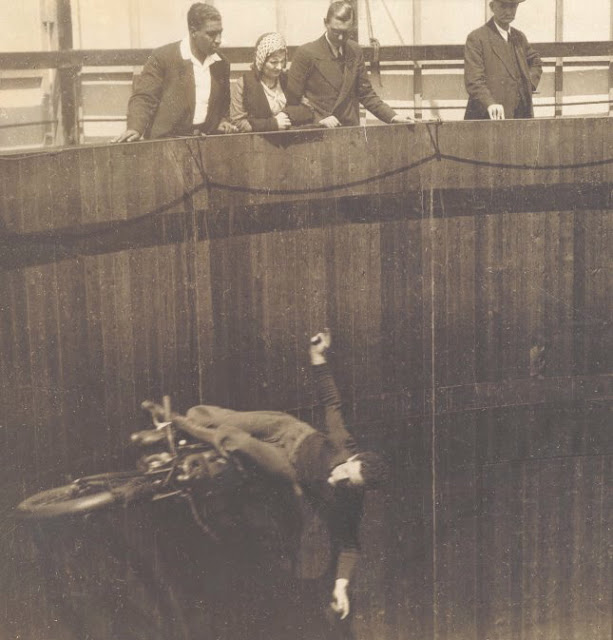 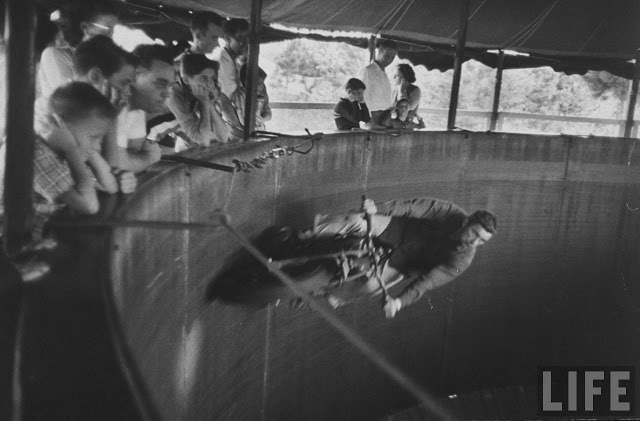 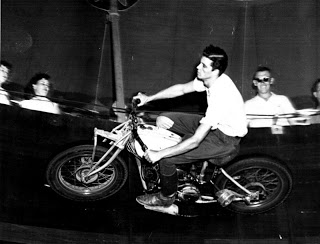 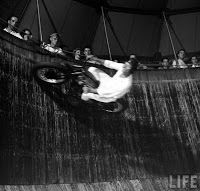 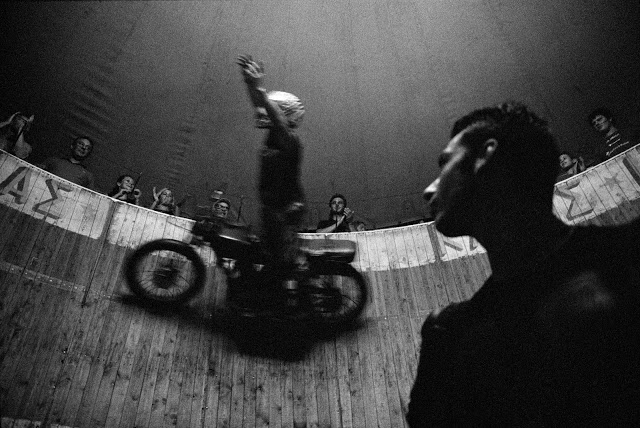 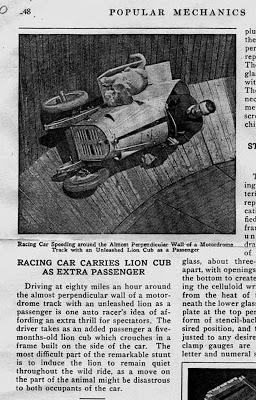 “Fearless Egbert” was a British showman at the height of the motordrome era, and one of the earliest to ride the Wall of Death in the British traveling carnival “Collins Famous Death Riders & Racing Lion” run by Billy Butlin and Pat Collins in the 1920’s and 30’s. Not satisfied with riding a motorcycle horizontally at high speeds in a flimsy portable wooden barrel, Egbert used a custom built car which he rode along with his pet African lion, Monarch.

According to a news article from the Yorkshire Evening Post on September 24, 1931:

“A ledge was fixed to the side of the car, and there was never any need to coax him to sit on it. He hopped aboard as soon as he was released from his cage, and snarled and growled if the driver had any difficulty in starting.
“Nowadays, Monarch is driven round the miniature track at speeds that would make his more sedate father gasp. If Fearless Egbert stops the car too soon, the young lion remains on the car. There are times however, when he gets a little bored, and the driver knows it is time to stop when he realises that Monarch’s head is very close to his face.”
The report adds: “The owner of Monarch (said the) lion has never been strapped on the car. He jumped on it when he was three weeks old and now has thousands of miles of motoring to his credit.” 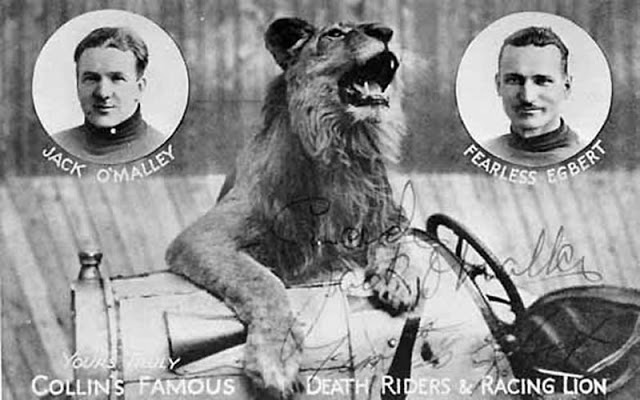 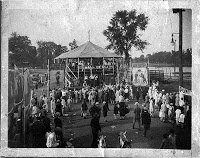 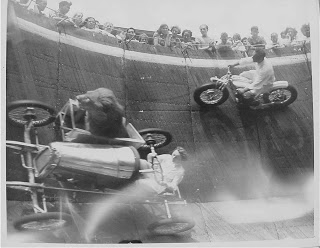 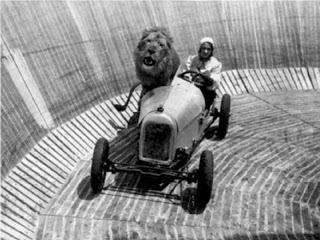 Perhaps the combination of a “lion taming” act and the Wall of Death was simply inevitable, but it soon caught on and several venues began offering the show in various forms. Some carried various big cats in motorcycle sidecars or on their stunt cars, in other shows trained lions would be released after the motorcycles were horizontal on the wall and would chase after them (on the ground of course) “…swatting with their huge paws”. The Pelaquin family, icons of the American Wall of Death shows, owned and operated the last of the lion dromes along with their adult lion “King”. King reportedly hated two things: alcohol and being grabbed by strangers, so when a drunken carnie stuck his hand in the cage and grabbed him in 1964 King grabbed him back. The police were called and unfortunately had to shoot the enraged animal, closing the last lion drome. 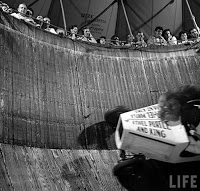 Women in any shape, size or fashion were always a top draw in the sideshow circuits (see my earlier post on Transverse Alchemy The Sideshow Girls ) and of course the daring damsels took to the thrill of stunt riding right away.
One of the earliest female stunt riders, Margaret Gast immigrated to the United States from Germany in 1893. She first pursued a career in bicycle racing (1900 world record for 1,000 miles in 120 hrs.) and later in motorcycle racing on both flat tracks and motordromes. Billed as “The Mile A Minute Girl”, she eventually began stunt riding both on The Wall of Death and on another portable board track known as an “amusement saucer” which appears to be some type of insane carousel. Gast rode a Flying Merkel Special Racer, and proudly claimed to be her own mechanic. Margaret Gast died in 1972 and was honoured and inducted in the United States Bicycling Hall of Fame in 1993. 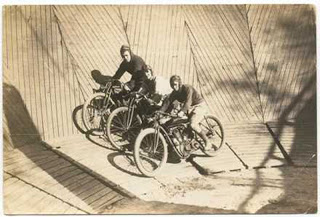 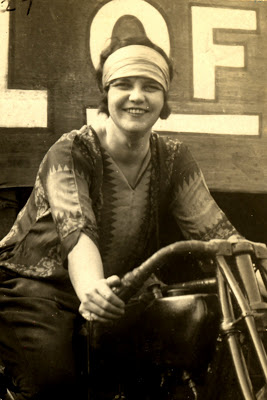 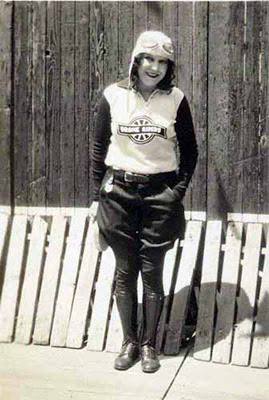 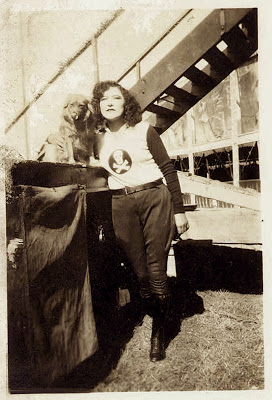 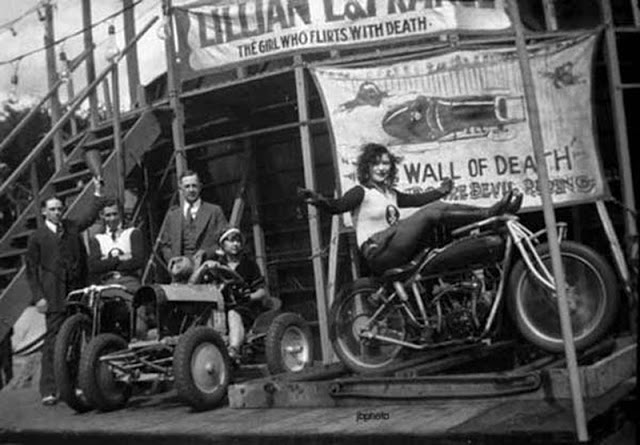 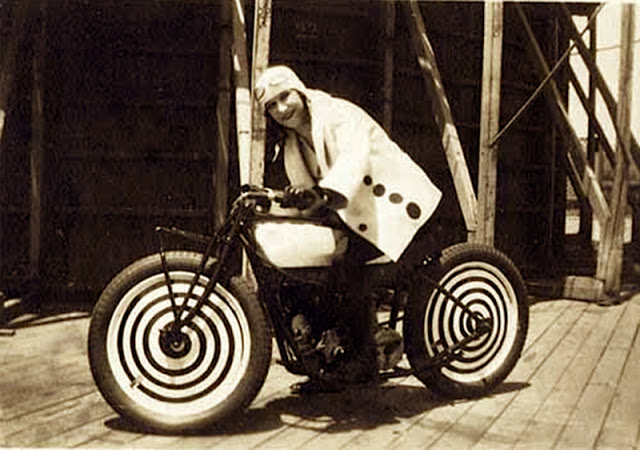 Another famous early rider was Agnes LaFrance, a Kansas farm girl who ran away with a traveling carnival and went on to become a world renowned motorcycle daredevil. Dubbing herself Lillian LaFrance, she began Motordrome riding in 1924 at the age of 30 and gained a global reputation as one of the most skilled Wall of Death riders on the circuit. 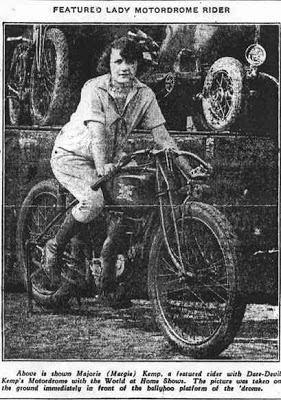 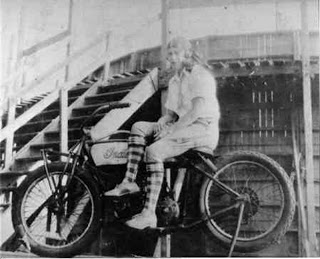 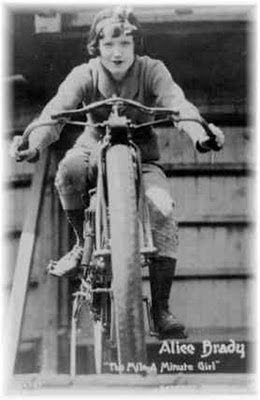 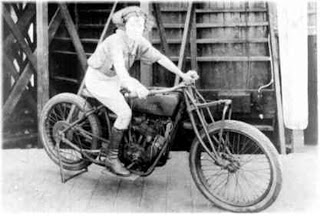 Other early female riders included Marjorie Kemp, who was also an animal trainer and had a lion drome act with the World at Home Shows; Viola Pelaquin of the Pelaquin Motor Drome family, and Alice Brady (another Mile A Minute Girl).

Cookie Ayers (now Cookie Crum) began stunt riding in 1949, crossing the eastern and southern United States with various carnivals and shows as one of the prominent female riders of the Wall of Death through the 1950’s. Once known as “Queen of the Hell Drivers”, she was noted for her disdain for black leathers: Cookie always wore white in defiance of the “outlaw biker” model. Crum is one of the few women to have been inducted into the Sturgis (S.D.) Motorcycle Hall of Fame.

One of the most notable modern stunt riders was Samantha Morgan (Storm). After running away from a troubled foster home in Long Island and living on the streets of East Coast cities for a few years, she ended up at a carnival in Dade County, Fla. in the mid 1970’s where she joined the Pelaquin Family. In her words, she “fell in love with the wall” and spent over 40 years as a stunt rider. Morgan rode with almost all the existing shows on her 1931 Indian 101 Scout (“Beth”) despite numerous back injuries and broken bones sustained in her career. Also inducted into the Sturgis (S.D.) Motorcycle Hall of Fame, Sam Morgan passed away in 2008 due to medical complications from her injuries. 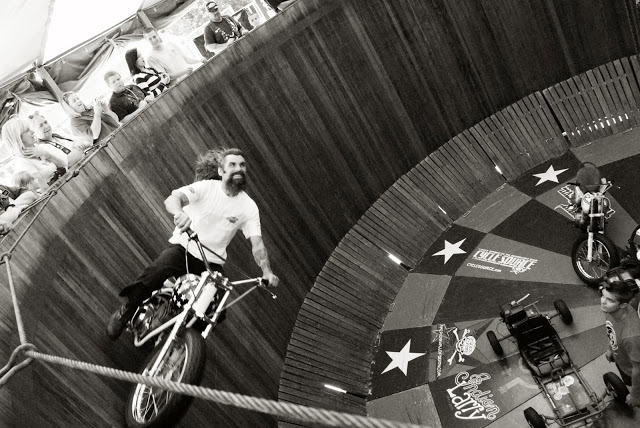 As of today only a few Wall of Death shows survive: in the USA the American Motor Drome, the California Hell Riders, and the less-than-creatively named World Famous Wall of Death are the only major existing shows. The UK is home to a few more, including the Ken Fox Troupe, Messham’s Wall of Death and the (even less creative) Original Wall of Death. In Sweden the Sala Motordrome has been running since 1937, and there are a few shows around Asia as well as some independent stunt shows scattered around the world. But there’s little doubt that the Wall of Death Silodrome is in it’s twilight years. And with it wanes a once vibrant part of motorcycle history.