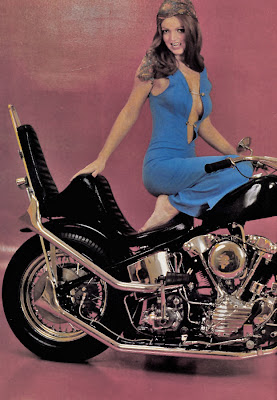 Sombody recently asked me why I don’t post more pics of Harley choppers on this blog. There are several reasons, but two jump to my slightly foggy frontal lobe right off the bat.
First, it seems that every yuppie (rubbie) these days has a shiny Harley in their garage that gets out about twice a year when they want to show off in front of the neighbors, and they all seem to have some mandatory need to share pictures of their wives flashing silicon enhanced tits (or worse, 300 lb. beer guts) on their “hawg”. My stomach frankly can’t handle browsing through them all.
Secondly,  Discovery Networks already beat the concept to fucking death and buried it next to the Official O.C.C. Custom Septic Tank in Paul Teutul’s back ’40.
Don’t get me wrong, I certainly have nothing against the machines themselves (at least the ones made before 1980), and every once in awhile I run across a pic of a custom chop that makes me go “huh”. Maybe it’s some ratty old 1%’er with his old lady, or somebody who saw one of Ed Roth’s bikes and said “fuck, I can outdo that rake”. Or maybe just something old and unique. Over the top. Or attached to a nice set of, erm…high beams.
Anyway, here ya go.
And a little history to sweeten the pie.
-charlie 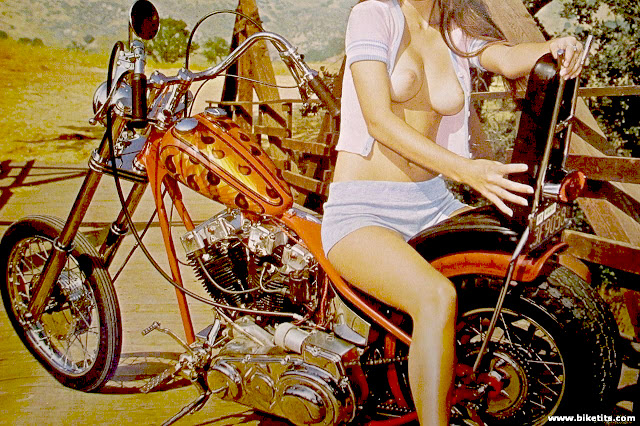 During WW2 some 90,000 Harley Davidsons were produced specifically for the war effort. This, along with the regular wartime motor pool produced thousands of men trained as mechanics. At the end of the war many of these returning GIs either opened their own garages or went to work wrenching for larger companies. Most focused on mundane automotive repair, but a certain group turned to hot rods and motorcycles looking to replace some of adrenaline they had experienced in wartime.

A huge surplus of military bikes provided a cheap, readily available source of machines for these thrill seekers. They immediately started modifying the utility oriented machines, stripping any parts or accessories that weren’t absolutely necessary: mirrors and lights were replaced with newer and sleeker styles, flat floorboards were replaced with foot pegs, fenders were either removed or cut down. Fat front tires and gas tanks were removed and replaced with much smaller ones. Exhaust systems were scrapped and replaced with straight pipes. Engines were bored and adjusted to get maximum horsepower and speed.
Mostly these mods were done to make the bike lighter for street and dirt racing, and they were commonly called “Bobbers” in reference to the cut down or “bobbed” fenders. But generally the frames themselves were left intact: although the early Harley frames were indeed heavy they were also strong, and that strength was vital both in the punishing off road races that were popular at the time and for the powerful torques produced by modified street racing engines. 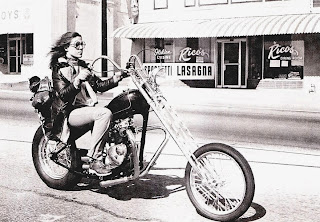 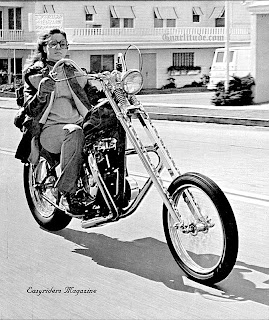 Nobody knows who actually built the first chopper; there is some reference to Billy Deere, a descendent of John Deere (founder of the machinery company that bears his name today) and friend of William Davidson who apparently built an intentionally-chopped motorcycle as far back as 1919. But choppers didn’t actually gain popularity until the early to mid sixties. This era saw a new type of biker, the so-called “outlaw” (see my previous post, An Incident at Hollister: Facts, Fiction and the Birth of the American Outlaw Biker Culture) who was less interested in racing motorcycles and more intent on a highly individualized machine that was geared towards a cruising lifestyle. These bikes seldom went off road, and taking advantage of the rapidly expanding interstate highway system bikers found that a longer front end allowed the bike to run smoother at higher speeds. 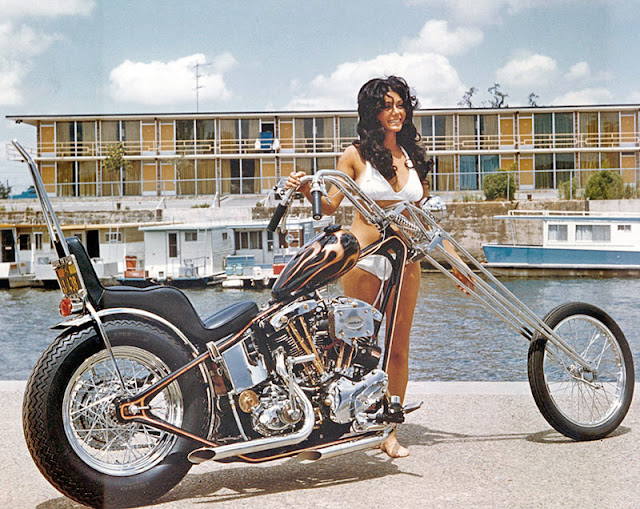 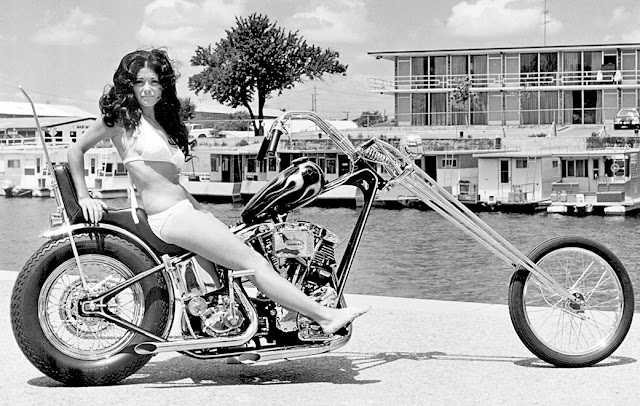 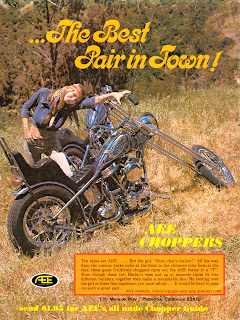 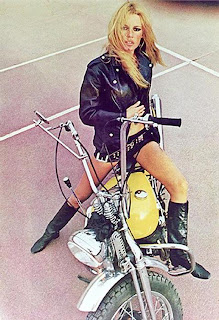 Originally unmodified factory bikes were used, usually a rigid Harley Davidson, and like the traditional bobbers everything unnecessary to actual operation was stripped off. Then the frame was cut or “chopped” at the neck  and welded back together at a wider angle (rake) to make the bike longer and lower. Girder and Springer front ends were the most popular forks for extending in this fashion, although it did make the bike harder to handle at slower speeds. Nevertheless, some choppers have extremely long forks; as one biker said, “You couldn’t turn very good but you sure looked good doing it.”
Most sources reference the movie Easy Rider as the start of the custom chopper boom, and national news stories on the antics of the Hells Angels in Altamont certainly had the image of the biker outlaw already fixed in the public’s eye. Ed “Big Daddy” Roth (An (un)Holy Trinity of Custom Culture- Part 2, Ed Roth) quickly jumped into the fray producing some highly customized chopper themed trikes. 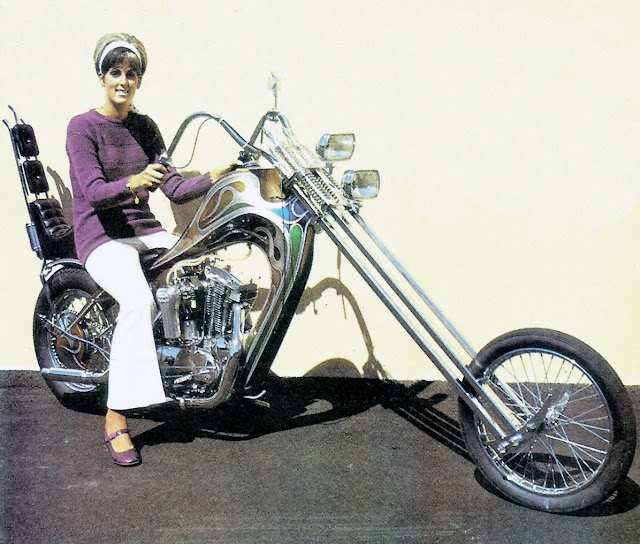 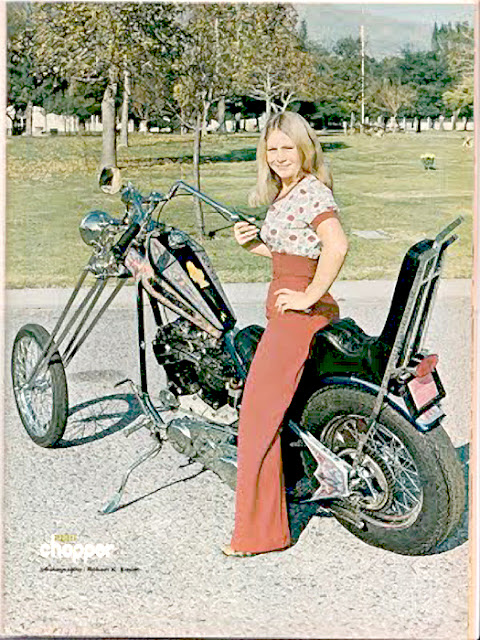 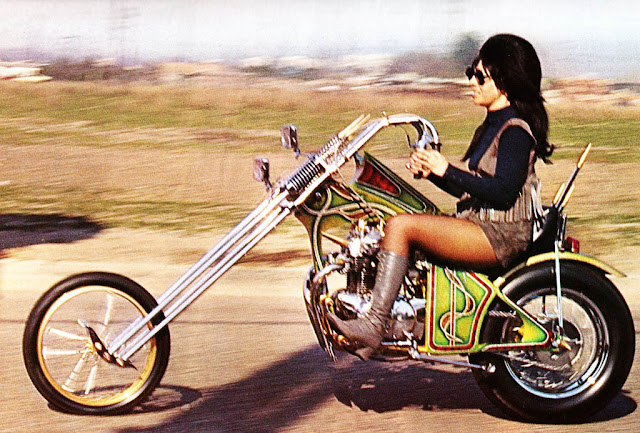 These late sixties and early seventies choppers were highly modified bikes often sporting style innovations like ape hanger handle bars, skinny front tires and “sissy bars” which served a dual purpose as a lightweight passenger back rest and vertical luggage rack. Now bike builders weren’t  just removing unnecessary parts but were also adding custom touches of their own. Still, with few exceptions there were no “custom bike builders” and most of the work was being done in the rider’s own garage.
As the seventies progressed , builders began to get more creative and the bike as a form of art was born. Popular artist David Mann (The Art of the Ride: a Tribute to David Mann) captured this chopper lifestyle in his work which was being featured in Roth’s Choppers Magazine and the newly published EasyRiders: in a classic example of “life imitates art” builders began to design bikes based on Mann’s more extreme artistic interpretations of what choppers could look like. 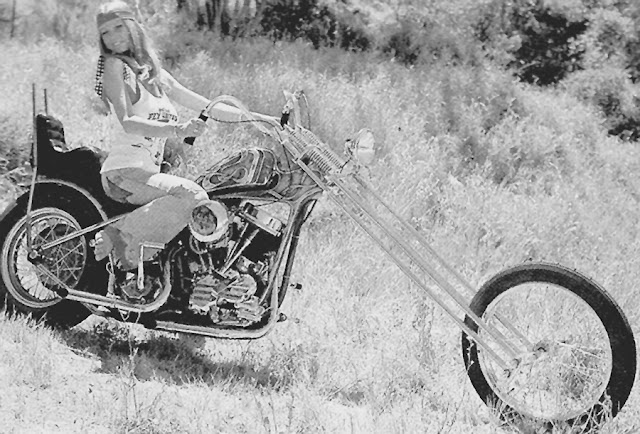 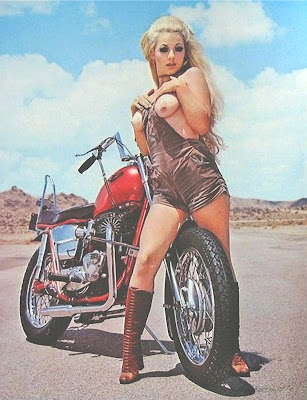 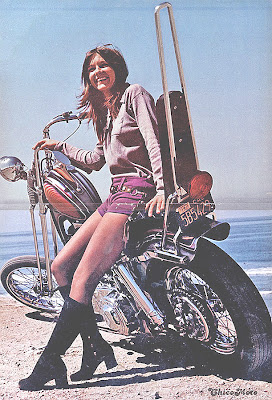 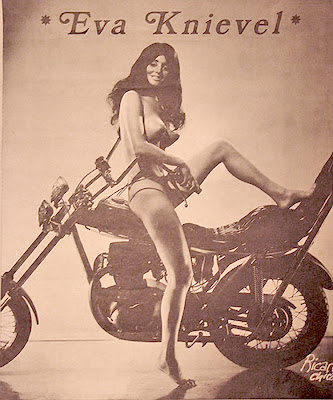 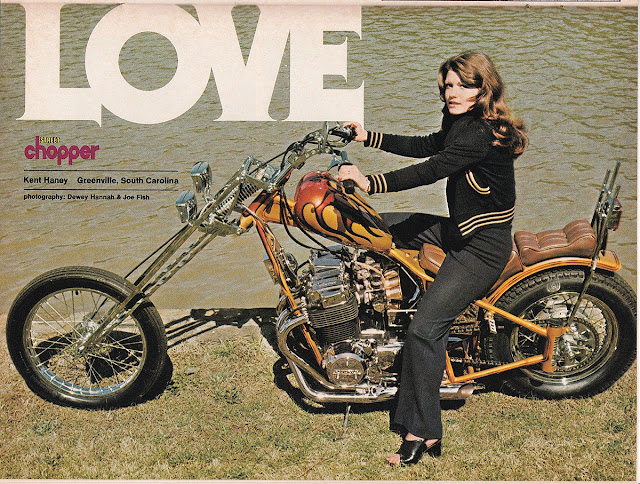 The end result of all of this modification was an entire industry catering to the phenomenon. Chop shops and custom builders sprang up all over the country; you could bring in a stock Harley, and depending on how much money you wanted to spend ride out with a completely customized and chopped bike. The explosion of custom builders was mirrored by the aftermarket parts industry which now produces a myriad assortment of chrome and plastic accessories to fit virtually anything with an engine. 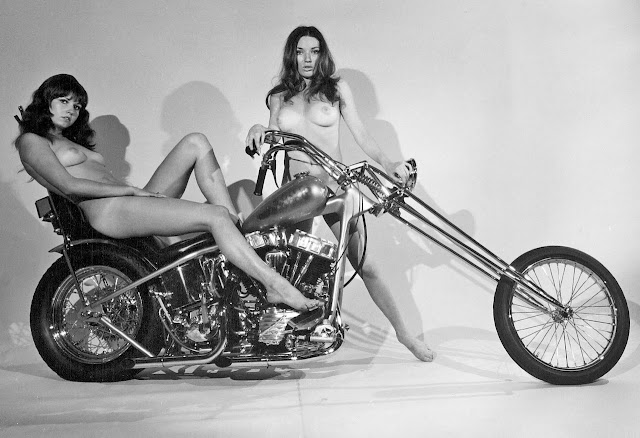 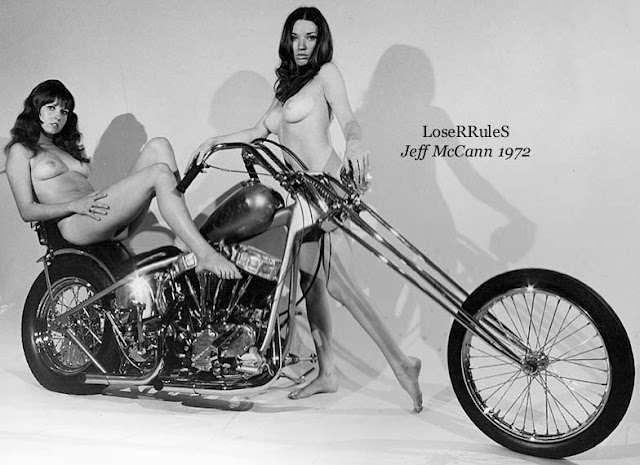 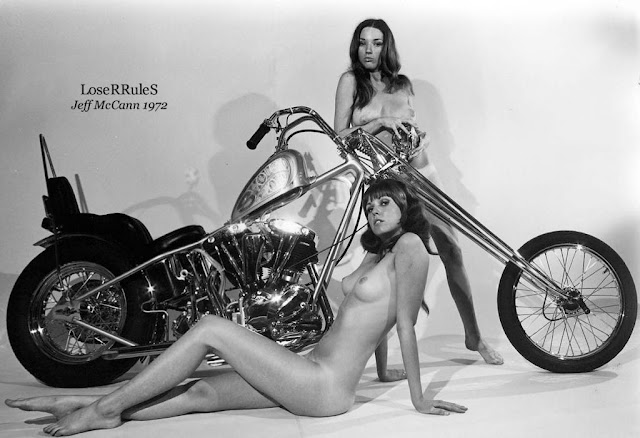 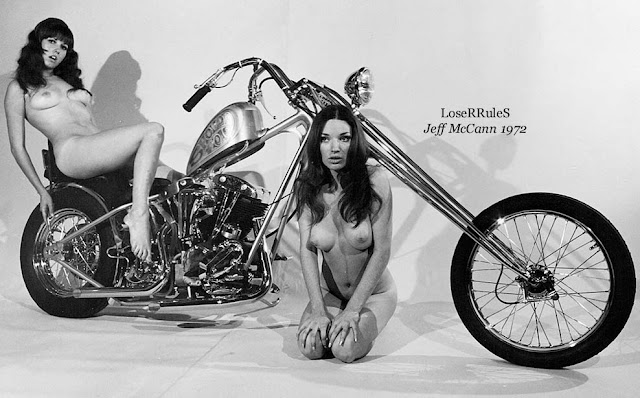 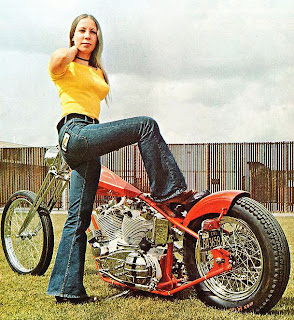 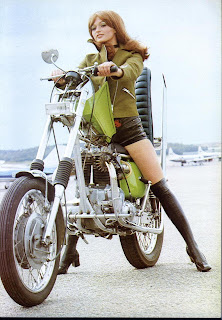 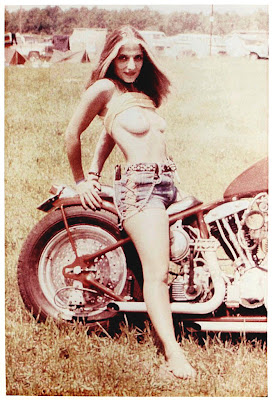 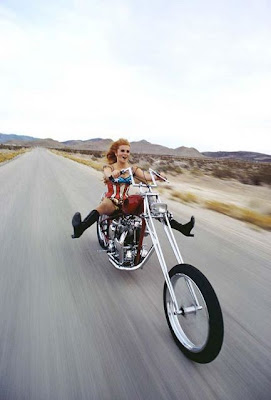 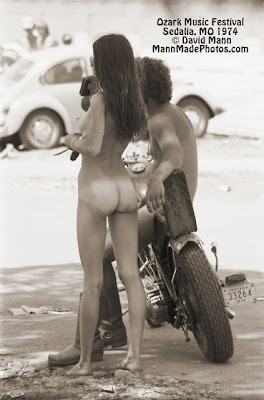 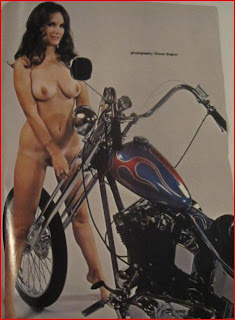 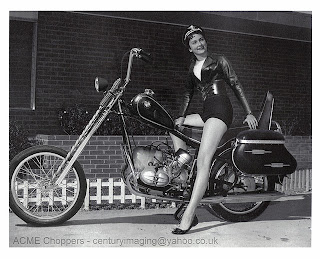 From here everybody knows the story, and like tattoos choppers have become de rigueur to the extent that with a few exceptions they’re almost as  mundane as factory line machines. But a few old timers can still look at a “custom” chopper built from stock aftermarket parts; fuel injected, water cooled electric start engines and cheap Taiwanese chrome and plastic and remember a day when bikes were built in your garage and the pieces were fabricated by hand. When a chopper was a unique and strongly individual expression of its rider, and when they stood apart from stock machines like glittering jewels in a box of pebbles. 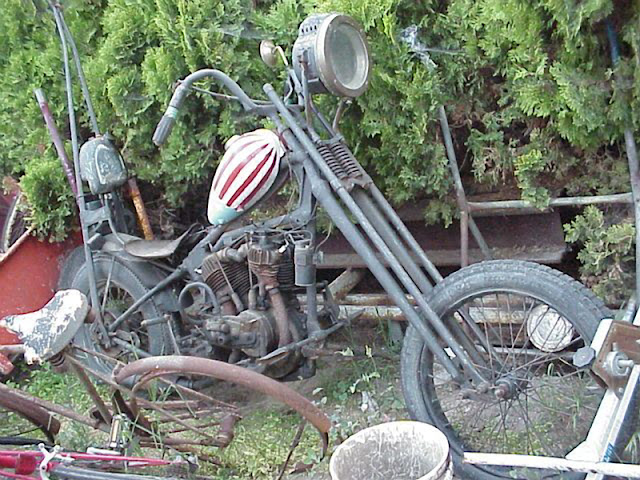 References:
A Brief History of the Chopper Motorcycle By Bronnie Vaughn
The Beginnings Of The Chopper
The First Chopper