“I saw the pale student of unhallowed arts kneeling beside the thing he had put together. I saw the hideous phantasm of a man stretched out, and then, on the working of some powerful engine, show signs of life, and stir with an uneasy, half vital motion. Frightful must it be…” – Mary Shelley, 1831 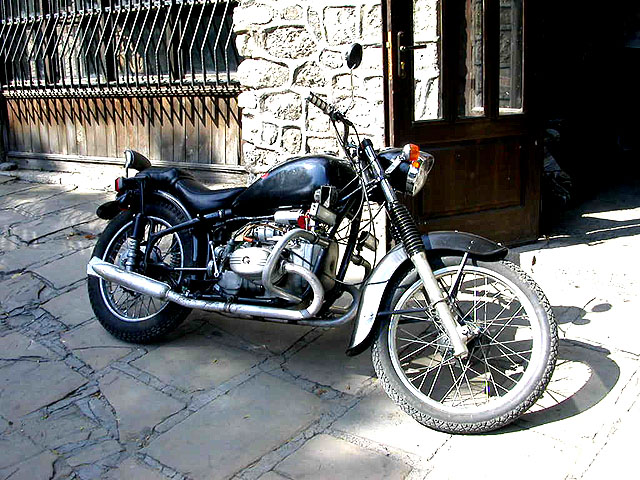 About 2007 a buddy of mine bought this Ural M61/Honda “Frankenbike” which had been lovingly modified with odd bits found on construction sites and a few plumbing fittings. Unfortunately for him, motor vehicle registration in BG at the time involved archaic rituals of tax stamps, third cousins, term limits and chicken entrails: he missed the fine print about the chicken entrails and the bike went into storage with the original plates on it, racking up taxes in somebody else’s name over the years.

Eventually I wound up with it. 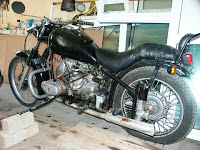 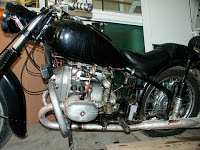 Sorting new registration was impossible so it became a parts bike, sitting in my garage for a couple more years as I slowly cannibalized bits for the M72.

One day I got a message from a brother up in RO that he had suddenly come to his senses and had decided to liquidate his entire yard full of old Russian scrap. Knowing that I was a full-fledged сумасшедший, he thought perhaps I would be interested in purchasing said scrap heap. A primary selling point being that nothing was registered anywhere and I could get a receipt for payment… I bit like a rabid (and slightly mangy) street cur chasing a truckload of bacon. Sitting in the garage, jacked up on cheap vino and local ditchweed, I began staring at the remnants of John’s old bobber and a half-baked plan began to form. 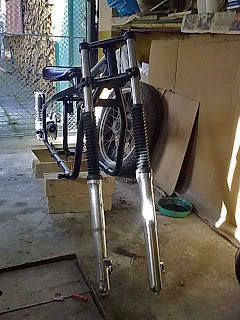 There were still plenty of engine parts leftover…the only real problem was the numbers. Another clean case & frame could bypass the legal hassles; so when the Valicaddy showed up in the drive and regurgitated a veritable treasure chest of fenders, engine bits and a lovely original M61 frame I donned my overalls and dug straight in, stripping the frame down to bare metal and redressing her in a classy coat of matte black.

The forks are 100cm Showa pneumatics (MC4-003), probably off a Honda XL500R. They fit the original Ural headstocks perfectly, and I complimented the front end with tapered steering head bearings to replace the original balls. The front wheel is a huge 21″ spoked aluminum rim, which caused a bit of consternation as several spokes had to be replaced: this was my first introduction to the parts game.
See, anybody here can order these parts, NO PROBLEM.
They can have them here in 5 days, NO PROBLEM.
When you show up after a week to get them, they’ll be here tomorrow, NO PROBLEM. When you show up 3 days later, they’re on the way, NO PROBLEM.
You are now in an indefinite loop. Eventually you get tired of driving across town to pick up your parts that don’t actually exist so you revert to using the phone. They stop answering. After a month you give up on any thoughts of building a relationship with the local suppliers and embrace Ebay. 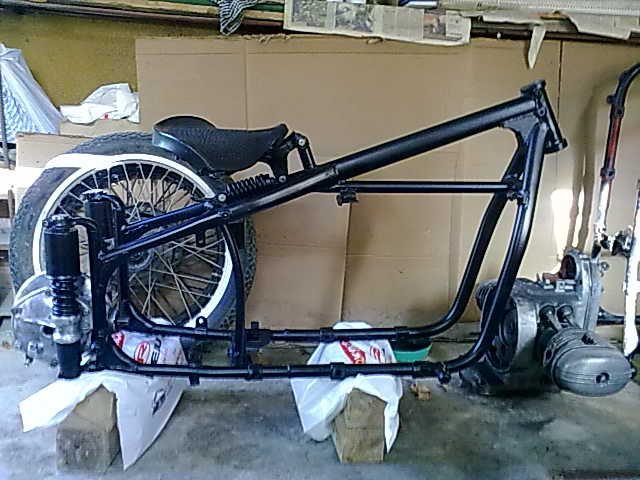 Spokes finally sourced, off for nickel plating (I have my reasons for avoiding chrome) at a local factory which partially restored my faith in mankind. Rear wheel (above) is stock, relacing was interesting. 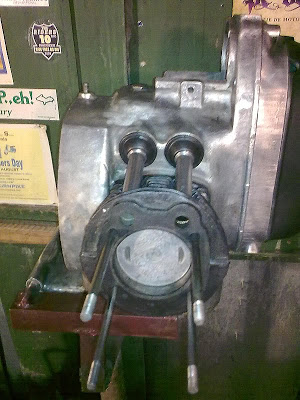 The engine had a complete rebuild using new bearings, seals, pistons and rings. Of the 3 cranks I had available I took the best. 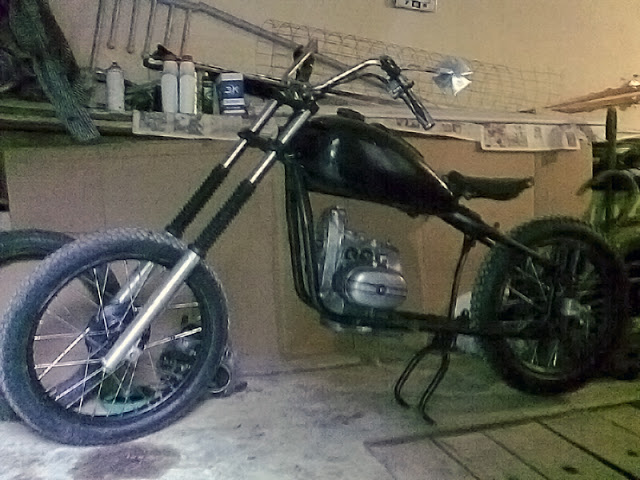 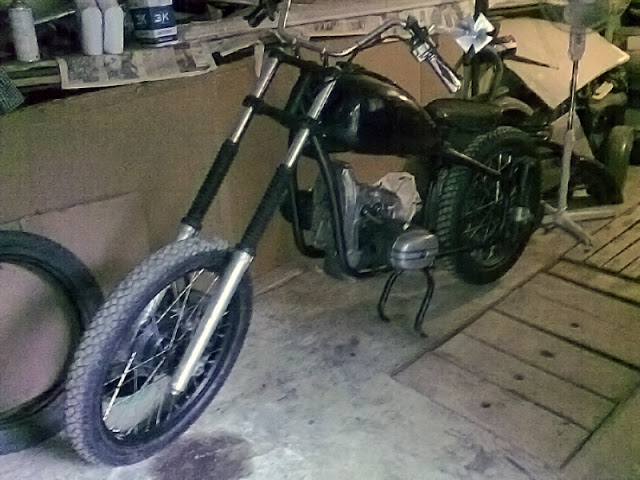 At this point the build had taken about a year- picking stuff up as money permitted, waiting on parts, and generally just working on it when I had spare time. I wasn’t in a hurry, I was intending to just build it for myself at that point and since I already had the M72 (along with the accompanying maintenance she required) the project began to languish on the back burner.
I’m not sure what prompted me to make the decision to sell it and buy a riceburner, but somehow that entered the equation. Speed was certainly a factor- I do have an (almost) real job and being able to ride over 80kph (50mph) was becoming a necessity if I wanted to get anywhere for the weekend. The bike was almost finished (I thought) and I found a great deal on an Intruder. Several people had expressed interest in the bike from the time I started the build, and my bro Guy had cash on hand and a strange psychotic urge to leave the comfortable bounds of rationale and immerse himself in the shadowy world of Russian Iron. Leva changed hands. I vowed to complete the project for him: he chuckled demonically. A contract was signed in Rakia and the blood of 13 virgin wombats: the machine now officially owned my soul. 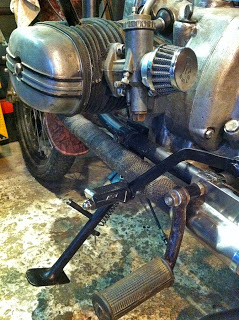 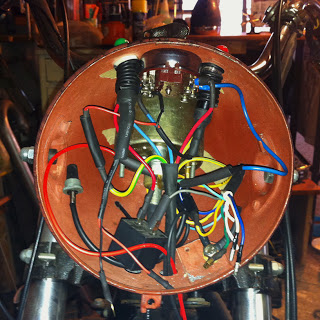 Unfortunately (you’ll see me use that term often in this article) there was still no budget for parts, so everything had to be done with what I had on hand. We rebuilt the original K37s (STFU about K68s already) and had new cables sorted to fit the high rise bars. Drag pipes were drawn up and poorly bent by a shop in Varna that would be better off making spaghetti than running a tube bender, so wraps were in order and I got to play the parts game again searching for internal baffles that would fit.
The bike was originally fitted with a 6v Г-424 generator: brackets and fittings were made to accommodate a Soviet 12v alternator and solid state regulator. The new ignition switch is from a tractor and has a larger profile than the original, so more mods had to be made in the headlight shell to accommodate wiring. The reflector was replaced with a H4 bulb fitting and a modern control switch was wired in to add bar-end turn signals and the electrical switch for hi/low beam selection (the stock switch is cable operated). I fabricated a custom kickstand to fit the drag pipes. 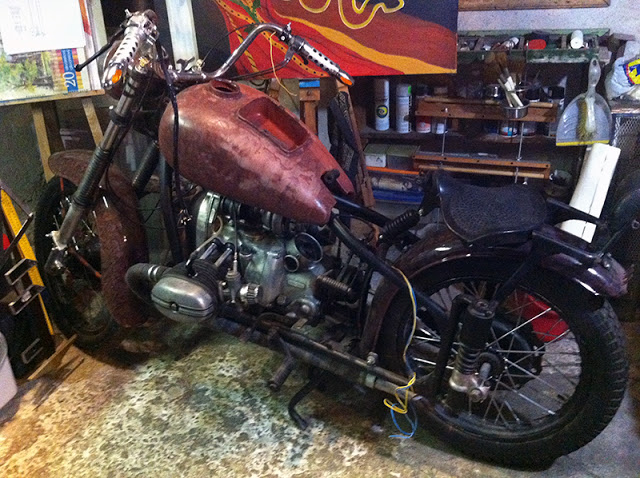 This is where shit began to get interesting. Guy is not a small man; this is not a particularly large bike. Riding it in a stock position would have him banging his knees on his chin. Everything had to be extended. Fortunately I had an odd gearbox that had been fitted with a solo shifter rather than the familiar rocker lever, and extensions on that along with the rear brake lever allowed us to drop the foot pegs down enough for him to get a bit more legroom. 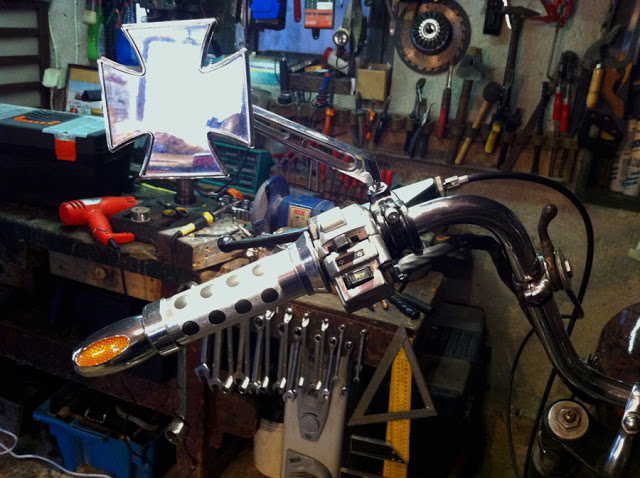 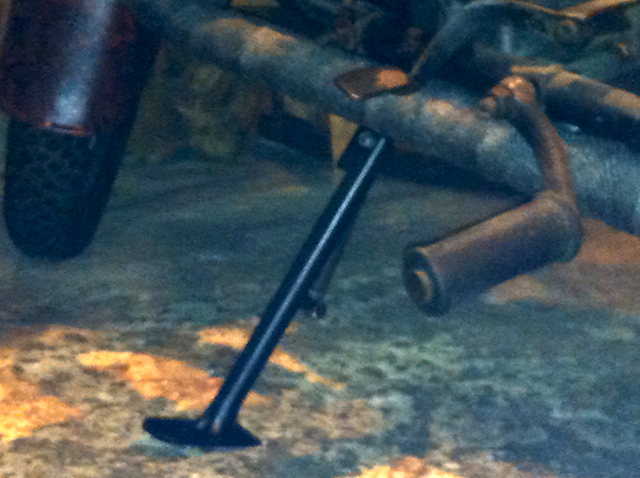 Guy also took over the paint plan of course, hydro-dipping everything himself. My “any color is ok for a bike as long as it’s black” philosophy did not stand a fucking chance and despite fighting tooth and nail I finally had to face facts and succumb to his Timothy Leary inspired graphic interpretations of Easyrider. The first attempts failed miserably, but in the end he came through with something that, I have to admit, isn’t completely horrible.

It isn’t a shiny $30,000.00 “American Chopper” and it was never meant to be. It’s a solid old Russian that starts on the first kick and tells you two blocks away that something is coming. It wasn’t a restoration job, it was produced on a miniscule budget and the spit-and-polish shit has never been my style. It is what he wants, hopefully: not quite a rat but definitely not a bling machine. It’s still a Frankenbike.
So without pulling any makeup out, here’s the final results… 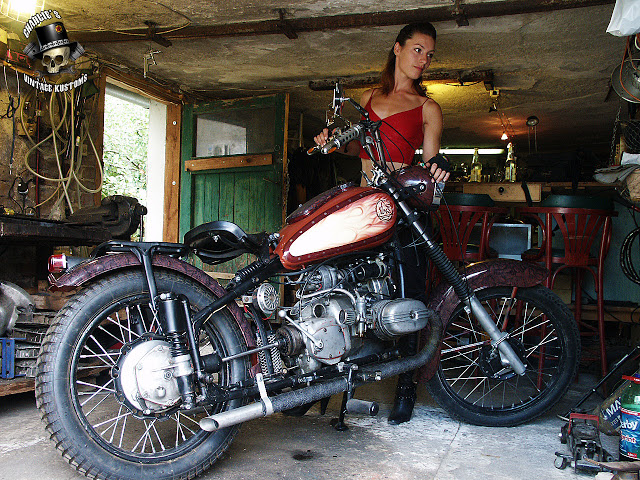 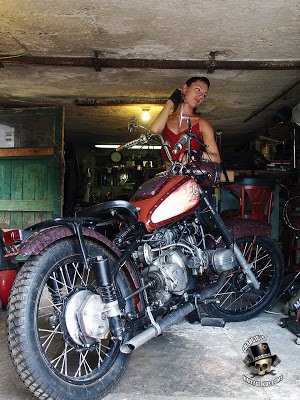 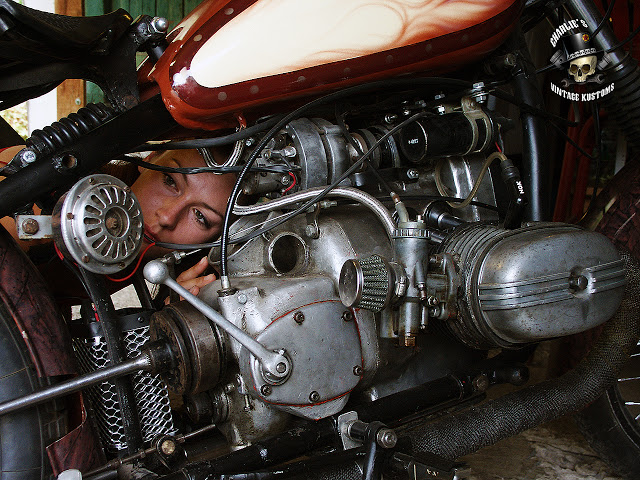 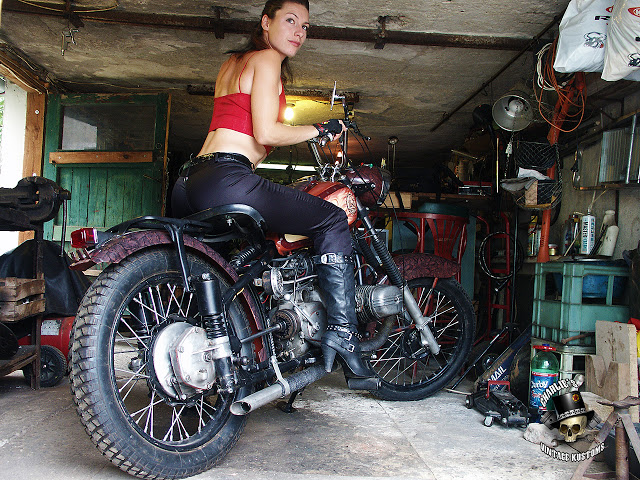 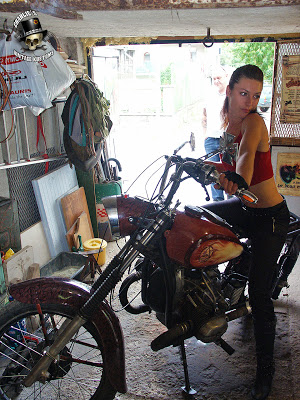 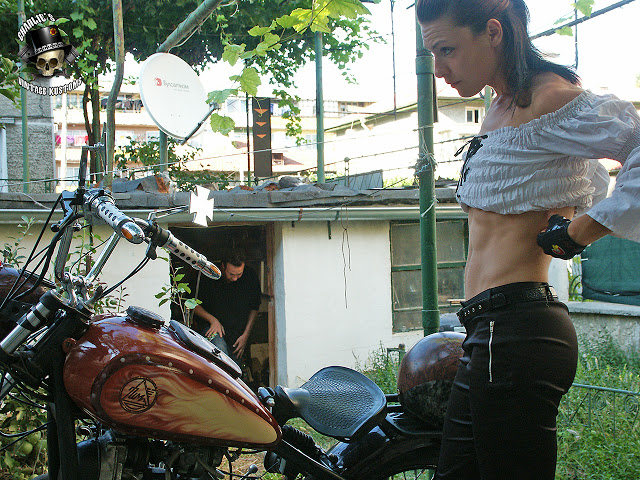 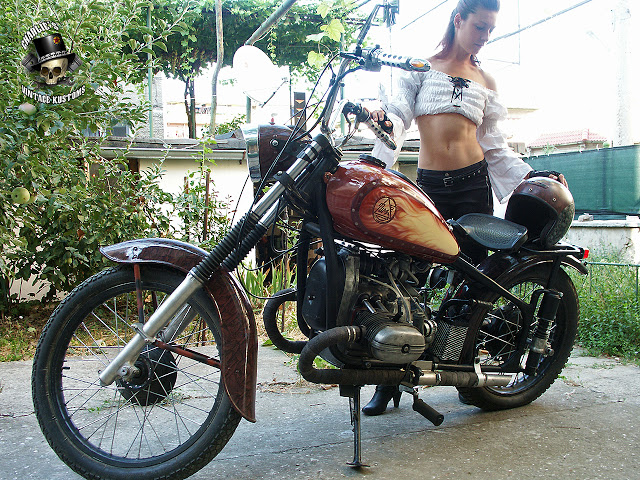 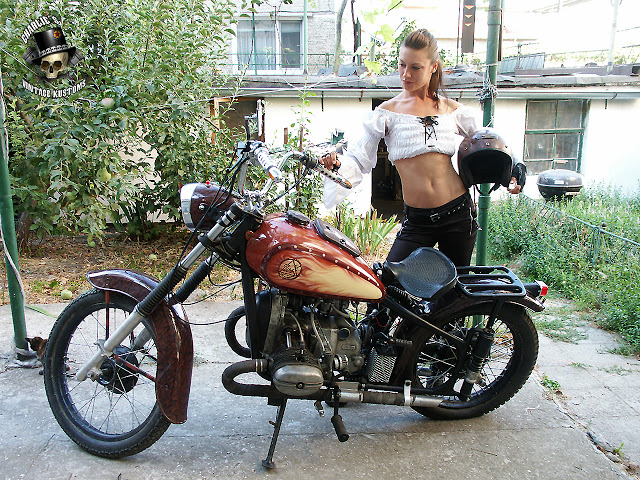 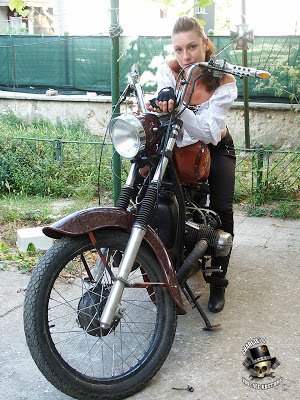 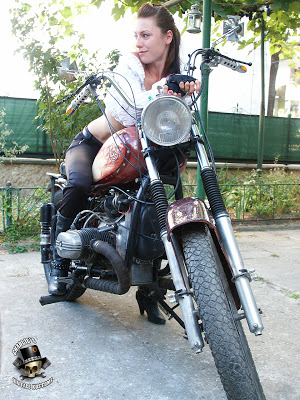 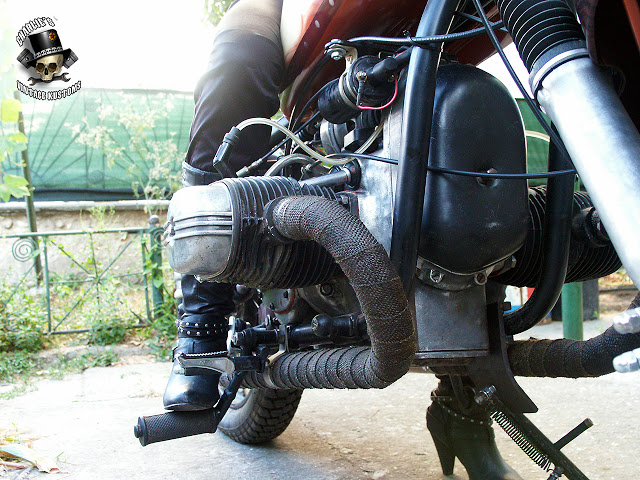 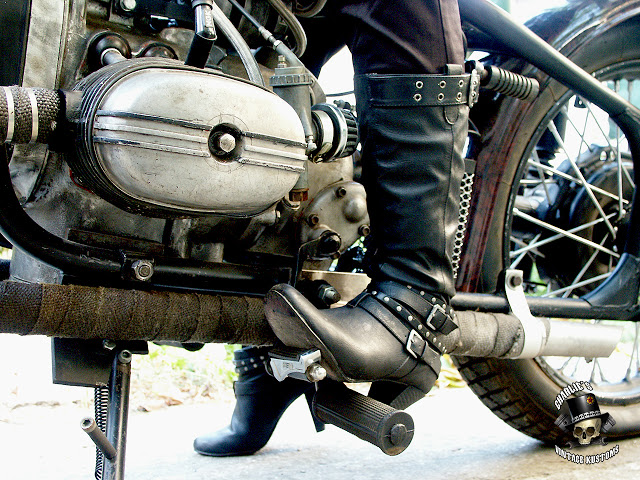 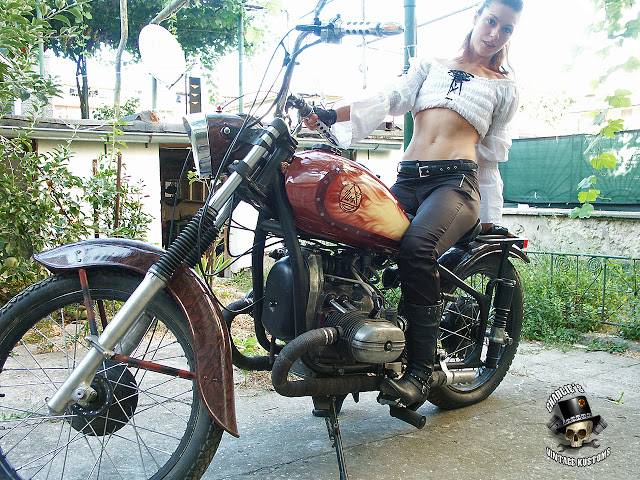 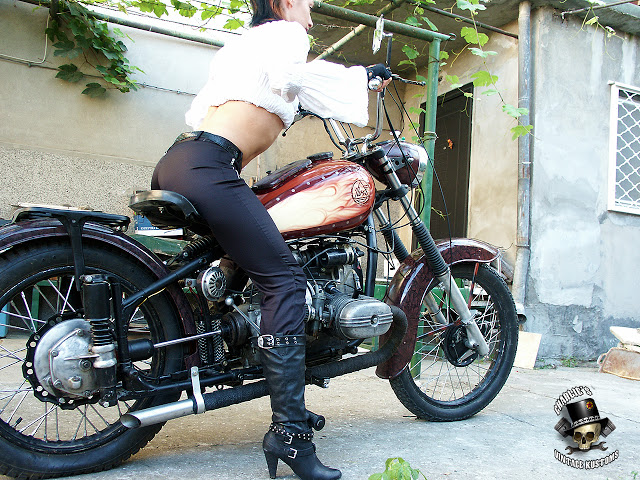 Model: Sylvia Rosat
For more information on the original Ural M61 see Irbit and Kiev: The Ural and Dnepr Motorcycles