This post is dedicated to my friend and fellow artist Dave Benfield, who is personally “fucking tired of skulls” in motorcycle art 😉 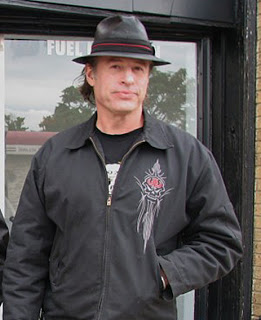 Born in Toledo, Ohio on September 20, 1961, David Uhl developed an interest in the arts as a child and received a scholarship to the Colorado Institute of Art during his senior year of high school. Reportedly dissatisfied with their design programs he dropped out after only a year and went on to pursue a career in graphic arts. He formed Uhl Illustration in 1980 and soon developed it into an award-winning firm servicing clients that included FedEx, IBM, Coca-Cola and Time magazine. In 1989 he hired another talented illustrator, Danial James, and in 1997 they formed a partnership to create Uhl Studios. In 1988 he bought a bike, and five years later he went to Sturgis for the annual rally. That experience led into an involvement with Harley-Davidson apparel and he was soon designing T-shirts and other merchandise for the company.

Early in 1996 Uhl began painting in oils and studied under renowned Vietnamese artist Quang Ho in Denver. He soon developed an interest in creating historical scenes, and with his connections to Harley he found that he had access to a vast amount of reference material.
“There was nobody at the time doing classical paintings of old black-and-white photography, really cool vintage stuff… So I called up Vinnie, my local H-D dealer here and asked if he had any old pictures or anything of old Harley imagery. He said yeah, sure – so we went looking through all of his shoeboxes and discovered one photo in particular that I really liked. There was even someone’s handwriting on the back: this couple had taken it somewhere in the Midwest in the early 1940s. So I fell in love and painted it.”
H-D was exhibiting nearly a century of history at the time, and he hand-delivered the piece titled “A Change in the Weather” to the brass in Milwaukee.

Uhl soon became a licensed artist for Harley Davidson and has since become their official archival artist. This also gave him access to the archives including a collection of photos done by L.C. Rosenkrans, the first official Harley-Davidson staff photographer in 1911. Taken mostly on glass plates these photos only became available in 1999 when the company reacquired them from the Milwaukee County Historical Society. Aside from their significant historical nature, what distinguishes these works is the artistry that went into them. “Rosenkrans composed the pieces like paintings, they looked like a painting. There was always a focal point, and there was often a nice big muted area for the type that they would drop in.” 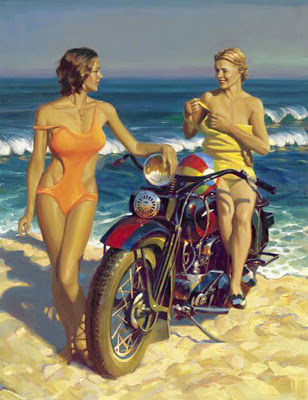 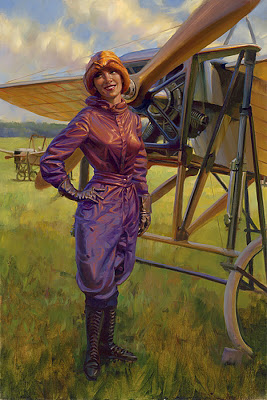 His collection of work is divided into groups, and include two sets titled Women of Harley and the Pin-Up Series. While these series focus on women in motorcycling they approach the subject from historical perspectives. While some are based on advertising or vintage archival photo, others such as “Ruth”  commemorate real-life figures.

The Women of Harley-Davidson

Launched in 1998, the Women Of Harley-Davidson series began with a popular cover from Enthusiast Magazine featuring a woman lighting a cigarette on a 1926 single (posted here back in August 2010). As the prints gained popularity he decided to do a collectible series. Since reducing future edition sizes to only 150 canvas prints with the release of “Rose” in 2004, they sell out quickly and have generated a strong secondary market following. 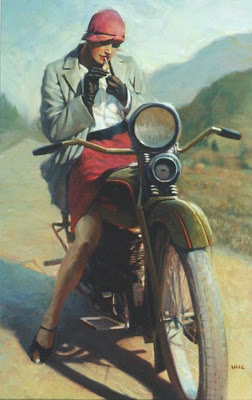 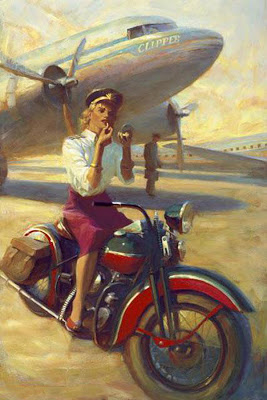 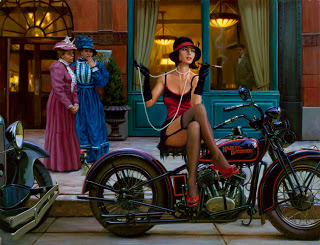 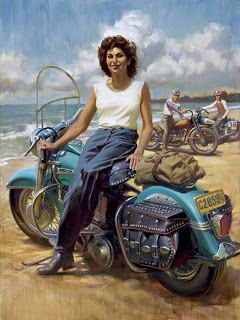 Influenced by the works of Gil Elvgren (1914-1980), an American “Pin-up” artist who became famous beginning in the 1940’s for his calendar illustrations published by Brown and Bigelow. Uhl Studios creates many of the T-shirt designs for MDA’s Dealer Shirts at each of Harley-Davidson’s conventions. “Playin’ Around” was the most successful design for them ever at the 2007 summer show in Nashville and David decided to offer an exclusive edition of prints. 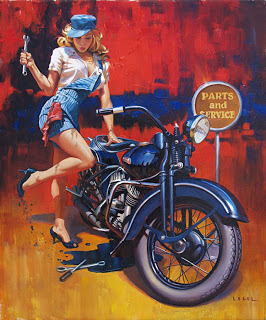 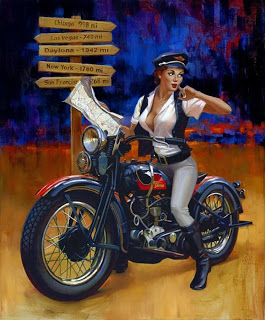 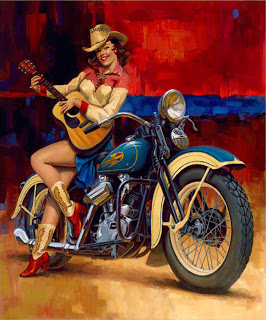 Other significant motorcycle-centered collections include official works for the Harley-Davidson 100th Anniversary, Sturgis Commemorative works, the “Graceland Project” (a collection of exclusively cross-licensed Elvis Presley works he created in conjunction with H-D and sculptor Jeff Decker), and a pair of covers for the official Indianapolis 500 race program, including the 100TH Anniversary edition in 2011. Beyond the motorcycle industry (and Harley-Davidson in particular) Uhl also extends his interests into the history of aviation and racing. 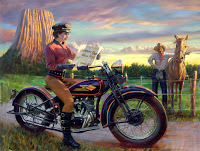 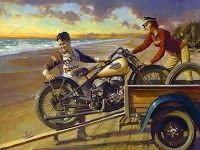 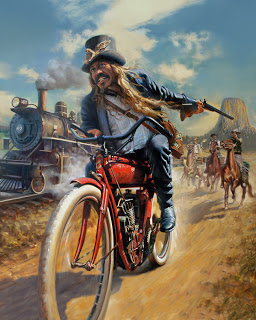 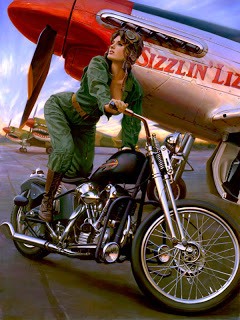 Recent work includes com­missioned paintings for Harley-Davidson to commemorate 100 years of police bikes and a documentary being filmed with a dueling artists theme, a project show­casing David and Jeff Decker, the sculptor responsible for the hill climber statue now residing on the newly opened H-D museum grounds. 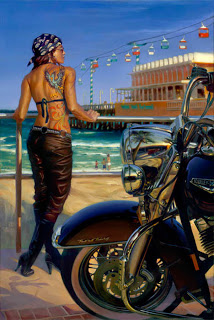 Uhl Studio is located at 15801 West Colfax Avenue in Golden, Colorado; Uhl Illustration is still active at the same location and continues to provide commercial illustration and graphics. David Uhl’s fine art Gallery 1261 is located at 1261 Delaware in Denver, Colorado.