In 1932 a British company, Frog, began selling flying model aircraft and scale model construction kits which quickly became popular with the public. Four years later they launched a range of 1:72 scale model aircraft kits made from cellulose acetate under the Penguin brand. By the late 1940’s several American companies had begun to produce plastic models and the popularity of the inexpensive kits among hobbyists ballooned in the post-war years. Many manufacturers began production in the 1950s and gained ascendancy in the 1960s; American model companies who had been producing assembled promotional scale models of new automobiles each year for automobile dealers also found a lucrative side business selling the unassembled parts of these “promos” to hobbyists. 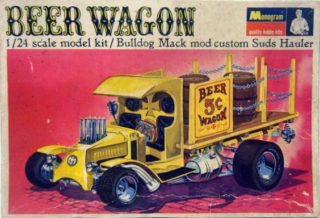 Two of the biggest model kit companies in America were Monogram and Revell; Monogram had been founded in Chicago in 1945 making balsa wood model kits of ships and airplanes, while Revell began in 1943 as a Hollywood CA. plastics molding firm which built HO scale train sets. As plastic injection molding became more lucrative Monogram began adding plastic parts to their balsa wood airplane kits, and following the competition the company started to focus more on hot rods and custom cars in the 1960’s.

In 1967 former GM designer Tom Daniel was writing a column for rod & custom magazine called “Off the Sketchpad”, and Monogram was sending products to the magazine for review. Daniel realized that some of his wilder car designs would make great model kits, and he contacted the company which came up with the idea of producing a custom Mack truck. They gave the idea to Tom who designed “The Beer Wagon”, a model still being produced. Tom Daniel was contracted as an exclusive Monogram designer and consultant. 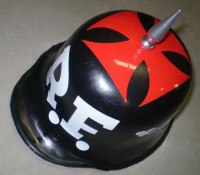 When the company asked Daniel to do a second model car design, reproduction World War I German helmets (being marketed by none other than Ed “Big Daddy” Roth himself) had become popular in the West Coast surfer/hot rod scene and Daniel decided to merge that with the iconic T-bucket.
Tom designed the original model kit with a 6 cylinder German aircraft engine and it was an immediate hit, selling more than two million units by 1973. Plastics manufacturer Mattel had bought Monogram in 1968, and in 1970 they introduced the first Hot Wheels version of the Red Baron: many millions more of those have been sold. The Red Baron is probably the most popular T-Bucket in history. 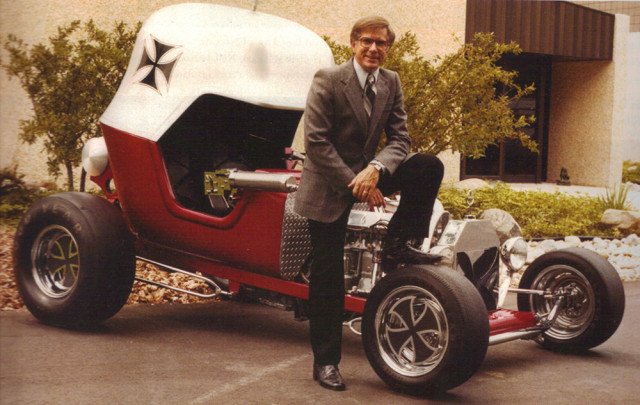 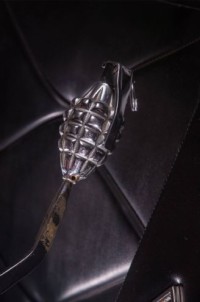 Bob Larivee Sr., whose Promotions Inc. was one of the premier car show organizations of the era, had seen the Red Baron kit at the 1967 Chicago Toy Fair and eagerly pursued a deal to produce a full-size version of the Red Baron for his shows. Chuck Miller, who ran Styline Customs in Detroit, had been working for Promotions Inc. for a while and had just won the Ridler Award for his Fire Truck C-cab hot rod, so the project seemed a good fit.
Miller began with a hand built frame, then formed the bucket body out of sheet metal. A clay model was built up for the helmet, which was then molded and the finished helmet was then created in fiberglass.

The machine guns were scratch-built out of steel and then chromed to look like the machine guns in the kit; the radiator, its gun sight ornament and all the crosses on the reverse-chrome wheels were also all hand fabricated. The suspension and steering are a mix of hot rod parts; a Tri-Five Chevy rear end, Model T rear springs and a mix of hand-made pieces. 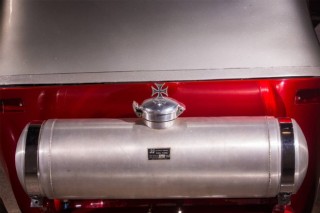 Chuck Miller poses with his Fire Truck and The Red Baron in the 1970s. 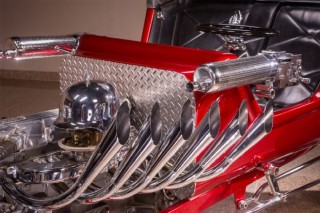 A major problem was the model’s WWI-vintage Mercedes aircraft engine, which was not only a bit difficult to find in Detroit but would be far too long for a T-bucket-size hot rod. Miller still wanted to echo the kit’s inline-six power plant, so he bought a new 1968 Pontiac overhead cam 6 cylinder, a pretty exotic look for the time. Unfortunately the Pontiac’s exhaust exited on the left side of the engine, while Daniel’s model had the exhaust trumpets on the right. Routing the headers across, under, or around the engine wasn’t going to work, so Miller left them on the left side. 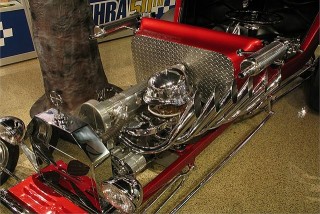 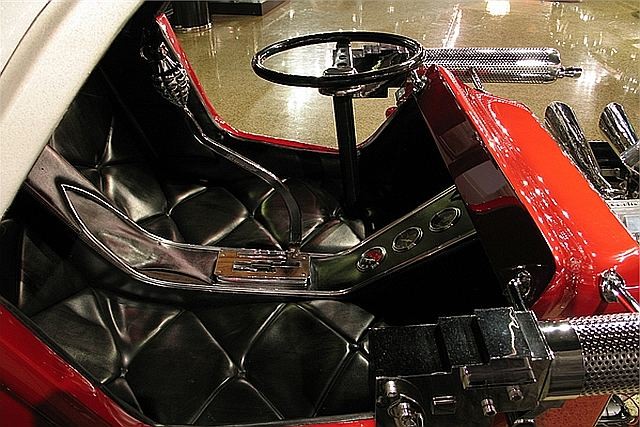 When Larivee and Miller brought the car to California and showed it to Tom Daniel, however, he reportedly went slightly ballistic claiming that they “messed up my car.”
Miller recalls; “…Larivee and I just looked at each other and wondered what that was all about. We figured, if he had designed it right in the first place, this wouldn’t be a problem.” But Daniel eventually cooled down. 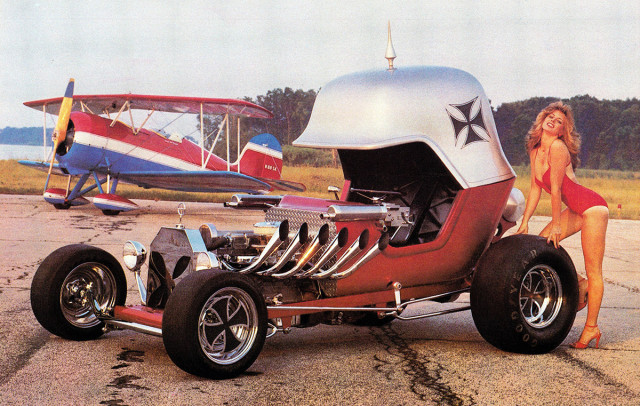 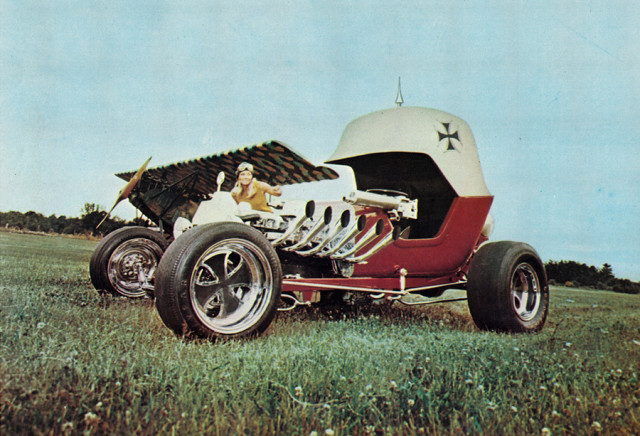 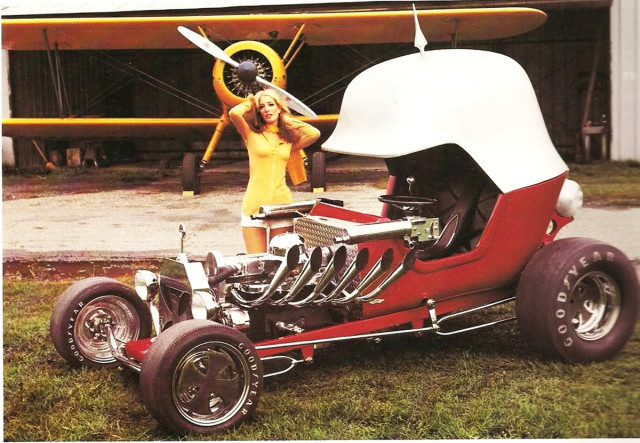 The car remained on the show circuit throughout the 70’s, until Larivee sold it to Jim Brucker for his Movieworld Cars of the Stars museum in Southern California with the understanding that he’d have first shot to buy it back if Brucker were to ever sell it. Eventually it did wind up back in Larivee’s hands. Due to its overwhelming popularity two more Red Baron replicas were produced by Jay Ohrberg, the original “Mr. Roadster”: one with a V8 and the other with a V6 engine.
Today, the original Chuck Miller Red Baron resides in the Larivee collection at the Smith Collection Museum of American Speed in Lincoln, Nebraska.